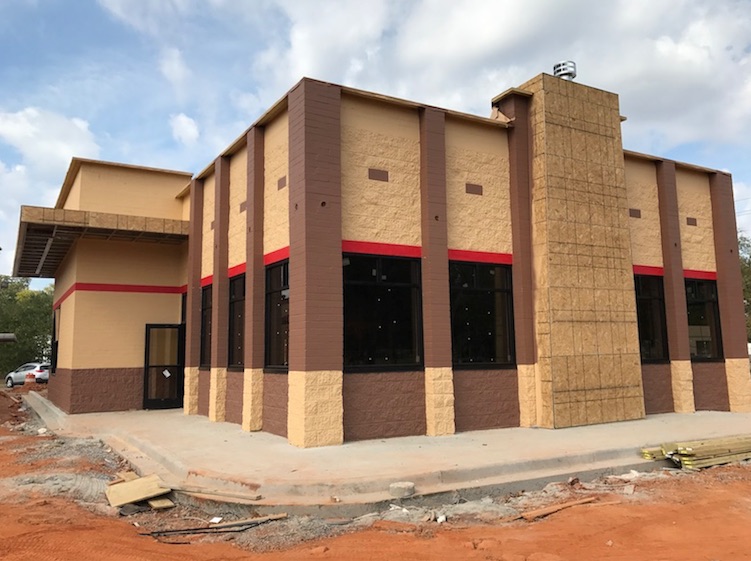 Last year, a new Jack's was built on Hwy. 21 in Sylacauga. Pictured here under construction. (Dec. 2016)

CHILDERSBURG, Ala. – The Childersburg Council approved a pair of resolutions paving the way for Jack’s Family Restaurant to start building on Highway 280 right after the first of the year.

Resolution 2017-26 authorized a development agreement with the City and the restaurant. Resolution 2017-29 authorizes issuance of the City’s Series E limited obligation certificate of indebtedness with regard that development agreement. The new $1.6-million restaurant will be located along the west side Highway 280 in the vicinity of Central Alabama Community College.

Also gaining approval was Resolution 2017-27, which joins Childersburg with neighboring cities and counties in opposing a proposed realignment plan from the Alabama Department of Corrections, which would shut down the Childersburg Work Release Center. That facility supplies work release labor for many municipal and county services at rates that make such services affordable for the cities and counties.

Resolution 2017-28 gives approval to advertise in The Daily Home, requesting that the Talladega County legislative delegation introduce a bill for a referendum on Sunday alcohol sales in Childersburg during the upcoming 2018 legislative session.

Approval was given to temporarily hire Alabama Termite and Pest Control to service City buildings, pending an opinion from the Ethics Commission.

The Council approved a request from the Parks & Recreation Department for Anthony Murphy to make application and be reimbursed for a drivers license passenger endorsement.

Training travel was approved for C.P.D. officers Tommy Wallace and Mike Moore to go to continuing education classes in Florence. The cost will be $75 each, plus per diem.

A pair of holiday-related items gained approval. The City will sponsor a professional float in the 2017 Childersburg Christmas Parade on Thursday, December 14th a a cost of $320. An advance allocation was approved for the Lighting of the Trees Committee.

During the Town Hall portion of the meeting, Mayor Ken Wesson reported that the relocated flagpole has been repaired and lit. “We are grateful for the donations toward the development of the new park at the site, and we will gladly accept more to move this project along. We fully expect it to be a Childersburg landmark,” said Wesson.