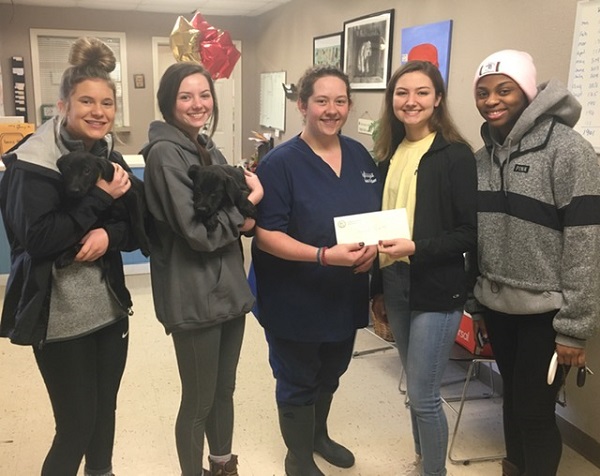 Freelancers President Megan Tankersley presented a check to Marlee at the Sylacauga Animal Shelter
Posted on February 10, 2020 by Kim Ellison

SYLACAUGA, Ala. -On Saturday, the Sylacauga Animal Shelter received a donation from the Freelancers Club to be used for medications.

The Sylacauga Freelancers is a sorority made up of junior and senior SHS students who work on monthly community service projects. This year the Freelancers are celebrating their 76th year of service! Their sponsors are Jessica Edwards and Leslie Lucas. Lucas stated, “The girls meet once a month and plan a community service project. They hold Stardust in December where they invite Sylacauga High School students. The money they take up from the dance goes to local organizations and scholarships for the girls.”

Megan Tankersley, President of the Sylacauga Freelancers remarked, “This donation is a portion of proceeds from the Stardust Dance held every winter for students at Sylacauga High School. We raise money by selling snacks at the dance, as well as selling of the tickets. The money raised is donated to the community. We know that Sylacauga Animal Shelter always needs food and supplies, so we like to donate to the shelter.” The Sylacauga Freelancers also donated food to the shelter back in the fall. These girls have a big heart for animals in need.

With Valentine’s Day coming up on Friday, you may want to make a donation too in memory/honor of a loved one. Kennel Technician Connie Willette said, “Checks may be made out to Sylacauga Animal Shelter and mailed to 41 Shelter Lane, Sylacauga, AL 35151. All donations, big or small are welcomed.” For more information, call the shelter at 256-401-2590.