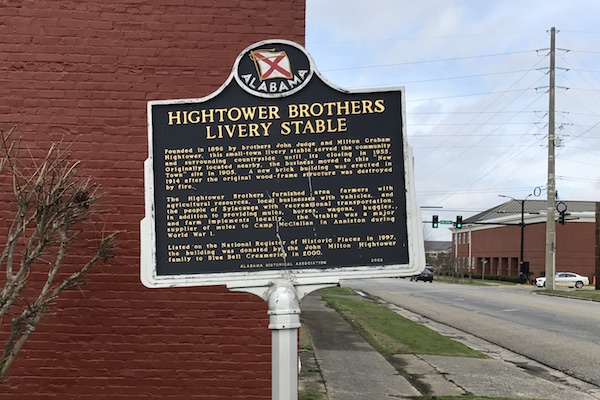 SYLACAUGA, Ala. – The Hightower Brothers Livery Stable lies in the heart of downtown Sylacauga on Norton Avenue. Being the first historic marker in the Sylacauga city limits of the SylacaugaNews.com Historic Marker series, this historic location is now owned by Blue Bell Creameries.

The Hightower Brothers Livery Stable served Sylacauga from its opening in 1896 to its closing in 1995. The stable housed various transportation and agricultural resources. Mules and horses with buggies provided transportation for Sylacauga residents, and equipment for farming could be purchased. The Hightower Brother Livery Stable also provided mules to Fort McClellan in Anniston, Alabama, during World War I.

Founded in 1896 by brothers John Judge and Milton Graham Hightower, this small-town livery stable served the community and surrounding countryside until its closing in 1955. Originally located nearby, the business moved to this “New Town” site in 1905. A brick building was erected in 1914 after the original wood-frame structure was destroyed by fire.

The Hightower Brothers furnished area farmers with agricultural resources, local businesses with vehicles, and the people of Sylacauga with recreational transportation. In addition to providing mules, horses, wagons, buggies, and farm implements locally, the stable was a major supplier of mules to Camp McClellan in Anniston during World War I.

Listed on the National Register of Historic Places in 1997, the building was donated by the John Milton Hightower family to Blue Bell Creameries in 2000.

The building was officially named a historic site in 1997.