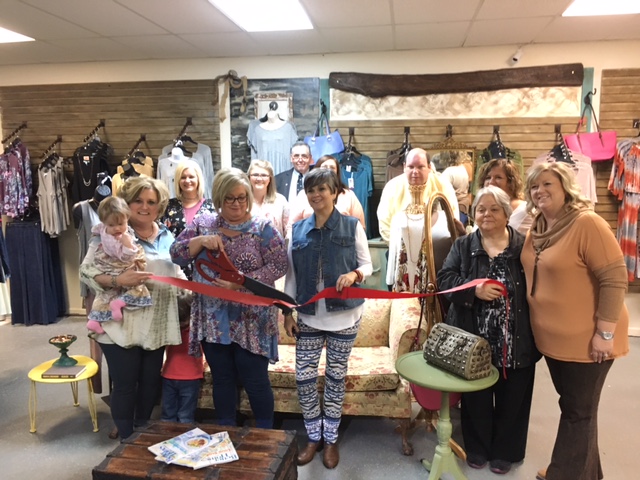 SYLACAUGA, Ala. – Lou Belle’s owner Linda Chandler smiled ear to ear on Tuesday as she re-opened her doors to the public after two long weeks of remodeling and renovations.

At noon, Lou Belle’s held its reopening celebration and despite the rain that pushed the ribbon cutting ceremony indoors, people in the community still came out to see everything new about the boutique. “It has been an awesome day,” said Chandler. “People in Sylacauga normally don’t get out in the rain, but they did today and I appreciate it.”

Refreshments and sweets including red velvet and key lime cakes were available for shoppers as they walked in Chandler’s shop. Chandler also placed many items on sale as a treat for everyone that attended the unveil.

Guests were in awe of the work that was done to Lou Belle’s in just two weeks. All the walls were repainted, the shop was brighter, new clothing items are featured, and she even brought in a few family possessions to make the shop feel like home.

Chandler told SylacaugaNews.com her mother-in-law and father-in-law passed away last summer. She said she wanted to honor them and have things in her shop that would remind her of them. Chandler said she was able to bring in a couch and an antique refrigerator that belonged to them, and now they will always be a part of her boutique.

Many cities have lost their downtown atmospheres because of major bypasses like Hwy. 280, but Sylacauga has not. But how has Sylacauga been able to thrive and avoid the downtown disaster many other cities are dealing with? Sylacauga Chamber of Commerce Director Mike Landers said downtown has been able to survive because of its diverse and distinct feeling.

“There are some wonderful stores downtown,” said Landers. “And the uniqueness of stores like Lou Belle’s bring such a hometown feel to downtown Sylacauga which is just so important to the city.”