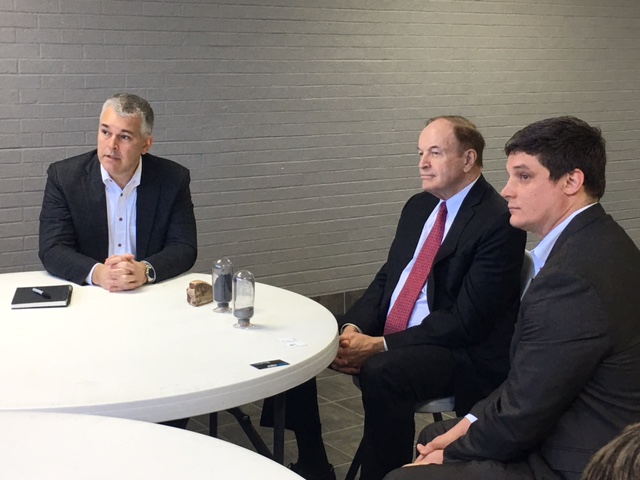 STEWARTVILLE, Ala. – Over the weekend, the Stewartville Volunteer Fire Department hosted important local, national and international figures. At noon on Saturday, Sen. Richard Shelby met with members of the Canadian-based flake graphite exploration and development company Alabama Graphite Corp. (AGC) and several members of the Coosa County Chamber of Commerce.

The meeting was just one stop on the Senator’s tour around the state of Alabama. Chamber President Kathy Fulmer told SylacaugaNews.com Senator Shelby reached out to her organization to inquire on who he should meet with in Coosa County and she felt AGC was a company he would want to sit down with.

During the meeting, AGC explained its planned to build the first and only natural flake graphite mine in the United States since WWII, and to manufacture a battery-ready graphite product for use in lithium-ion technology all in Coosa County. Lithium ion batteries are used in everything from consumer electronics, to solar energy storage, electric vehicles, grid storage, and is also the battery of choice for most military technology. SylacaugaNews.com previously reported on the future plans of Alabama Graphite Corp. in Coosa County.

Fulmer is excited about the opportunities AGC will bring to Coosa County. The jobs created by the mine is what catches Fulmer’s attention. She said the 70 to 75 jobs that could be created would be great for a county like Coosa County.

According to Edmondson, the mine could just be the beginning of an economic boom coming to Central Alabama.The mine and secondary processing plant are expected to bring hundreds of millions of tax-revenue dollars to the area over the life of the mine. Edmondson is also hoping the mine will bring service industry jobs to the area, as well as the battery industry. “Companies like to be close to their sources of raw material,” said Edmondson. “The marble quarry in Sylacauga is a perfect example of that, and that is what we want to do here.”

As one of the two senators of the state, Shelby obviously has a vested interest in the economical impact the graphite mine and secondary processing plant will have on the state and Coosa County, but he also sits on the Defense Appropriations Committee and sees the opportunity and implications for the United States Department of Defense. Currently 100% of the battery ready graphite comes from China, and according to Shelby that is a problem. Shelby stated the United States cannot be dependent on China for raw materials and technology that is critical to our modern society, and most importantly to our military’s strength and success.  We need to create U.S. mining jobs in Alabama and develop our own strategic mineral resources in this country as a matter of national security.

AGC extensively discussed the uses for battery ready graphite with Senator Shelby and shared how the companies it is working with are creating and producing on-body soldier electronics and mission critical defense applications. Edmondson said Senator Shelby left the meeting encouraged by with the work already completed by AGC, and the company’s future goals. “He was very impressed with what we’re trying to do,” said Edmondson. “He completely understands that energy is evolving and how energy storage in batteries is becoming critical to modern technology.”

Sylacauga Mayor: Save your money by spending it in Sylacauga