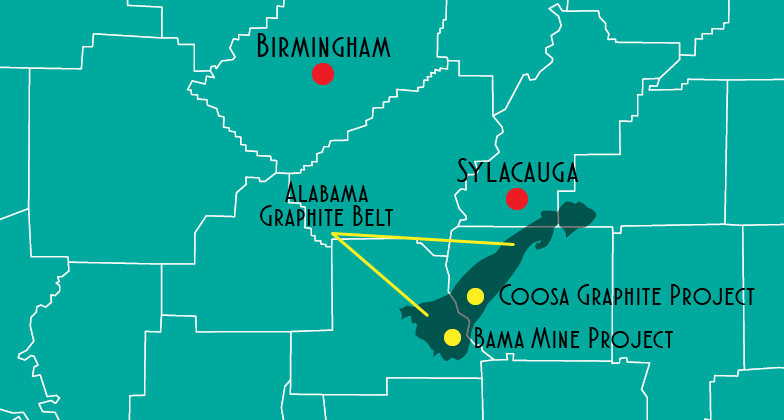 SYLACAUGA, Ala. – The future of America’s battery power is here, just south of Sylacauga.

In 2012, a Canadian-based company acquired mineral rights to old graphite mines last used during World War II, and its Alabama Graphite Company Inc. plans to mine and process battery-ready graphite in a 65-square-mile area near Weogufka in Coosa County. If all goes as planned, this location in the heart of the historic past-producing “Alabama Graphite Belt” will be home to the only fully-functioning graphite mine in the United States.

The ability to leave marks on paper and other objects gave graphite its name in the late 1700s, but there are hundreds of uses. An excellent conductor of heat and electricity, it is mainly sought after now for production of lithium-ion batteries, which power modern devices from cell phones to electric cars. According to Alabama Graphite’s business development director Jesse Edmondson, lithium-ion batteries contain 10 times more graphite than lithium.

Today, 100% of the graphite used in the U.S. is imported from China, but vice president Tyler Dinwoodie thinks using that graphite contradicts green energy standards due to mining practices. To get graphite to the required battery-grade 99.95% purity level, the Chinese employ extremely toxic hydrofluoric acid. “That acid destroys villages, and water, and it’s disgusting,” said Dinwoodie.

Dinwoodie plans to compete by pushing the Chinese to “step up their game” when it comes to the environment. More importantly for Alabama Graphite, hydrofluoric acid need never be used with graphite mined in Coosa County because it’s already better than 99.95% pure and can be further purified using a dry environmentally-friendly process.

With the most advanced flake graphite project in the contiguous United States, Alabama Graphite Corp.’s objective is to become the first producing American graphite mine this century — and to become a leading American supplier of specialty graphite for growing green-energy lithium-ion battery markets.

According to information on Alabama Graphite’s website, the company is fast-tracking project development. Within 18 months of completing required feasibility assessments and with additional funding, the Coosa County project would initially employ 60-75 people and could quickly expand to meet additional market demands. An updated mineral resource estimate released in 2015 referred to this Coosa County project as the largest graphite indicated resource in the U.S.

For many worried about a major mining operation creating a 42,000-acre hole in the middle of Coosa County, Alabama Graphite says not to fear. Dinwoodie assured that the project will be “a drop in the ocean” when compared in size to other projects such as Sylacauga’s marble quarry.

“It’s going to be very small, basically at surface or just above the surface with no overburden. You’ll see a series of pits, but to call it a ‘mining operation’ is a little bit overstated. It will be basically be two backhoes and a few trucks. You will not see a huge strip mining or huge pits or anything like that at all. It will be a very small and controlled open mine,” said Dinwoodie.