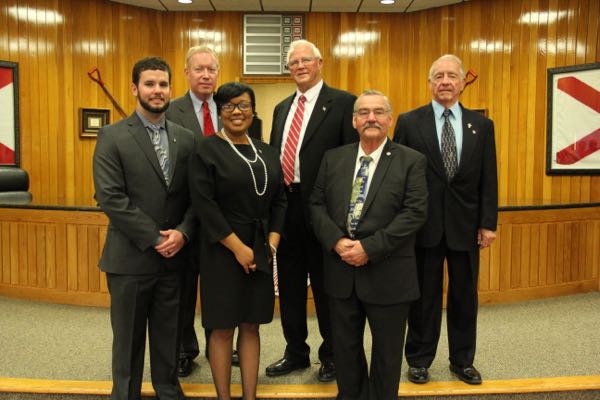 SYLACAUGA, Ala. – The Sylacauga City Council addressed several agenda items at its meeting Tuesday, Sept. 19, one approving a funding request by Police Chief Kelley Johnson for the Sylacauga Police Department to purchase additional TASER units as part of a grant application.

Currently, SPD has only six TASERs for its force, and this funding request along with an anticipated cost reimbursement grant will enable the purchase of 30 new TASER units as well as batteries, holsters, and cartridges in early 2018. The purchase will ensure every officer assigned to patrol is equipped with a TASER at all times plus provide six units for additional officers assigned to a shift.

The anticipated grant through the ADECA Law Enforcement/Traffic Safety Division (LETS) Byrne JAG Program could award $24,000. Chief Johnson’s request for $10,255 as a supplement was approved by the Council with the stipulation of the grant being awarded.

In other action, the Council gave approval to replace the traffic signal with a four-way stop at the intersection of E. Fort Williams St. and Main Ave. This change was recommended by both the Utilities Board and Police Department as a fiscally responsible solution in light of an expected $20,000 cost to repair the existing signal. Parts from the old traffic signal will be used to repair other signals. The city plans to provide extra signs and additional patrol until drivers become accustomed to the new four-way stop.

Resolution 38-2017 was approved by the Council authorizing participation in the Alabama Department of Revenue Municipal Intercept Services (MIS) for debt recovery. The Council also approved Resolution 40-2017 authorizing Mayor Heigl to execute a funding agreement between the city and the Utilities Board for improvements to the Lake Howard Recreational Facility.

Two board appointments were confirmed during the meeting. The Council voted to appoint Craig Stickley to the Industrial Development Board for a six-year term and John Ham to the Library Board for a four-year term.

The Council also begins 2018 budget reviews in additional meetings this week and next week and expects to approve the new fiscal year’s budget in early October.

The next regular meeting of the Council will be held on Tuesday, Oct. 3.