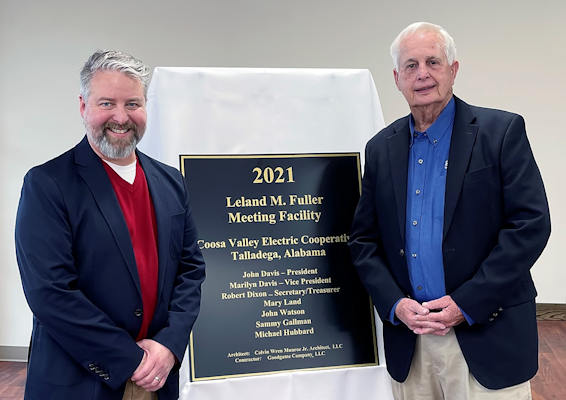 TALLADEGA, Ala. – Leland Fuller, ending a 38-year career with Coosa Valley Electric Cooperative, has retired as Chief Executive Officer, and longtime Manager of Marketing and Member Services Jon Cullimore is his successor.

The utility, which serves some 17,500 consumers in Talladega, St. Clair, Shelby, Clay, Etowah, and Calhoun counties, celebrated Fuller’s service at a retirement luncheon on Tuesday by dedicating its recently completed meeting facility in his honor.

Fuller’s leadership and skills were credited as helping modernize the cooperative’s operations, consumer service, and billing as well as improving efficiencies and service quality and establishing important partnerships with local economic development agencies. “The results speak for themselves,” Fuller said. “We helped bring in numerous new industries, 5,000-plus jobs, and more money in our local economies.”

The utility also noted that the addition of larger industrial and commercial consumers on CVEC’s power lines during Fuller’s tenure led to more stable electric users and an overall reduction in wholesale power costs. Fuller also moved the cooperative into the propane business in the 1990s, with Coosa Valley Propane now serving thousands of area customers.

Cullimore assumed his duties as new CEO on Jan. 1.

“I have been given the opportunity to succeed Leland as your next general manager,” Cullimore told employees and board members. “I am inheriting a wonderful organization, and I am blessed with you all – the best team of employees anybody could ask for.”

Not-for-profit and member-owned CVEC is one of more than 700 members of Touchstone Energy Cooperative, a national network of electric cooperatives across 45 states.