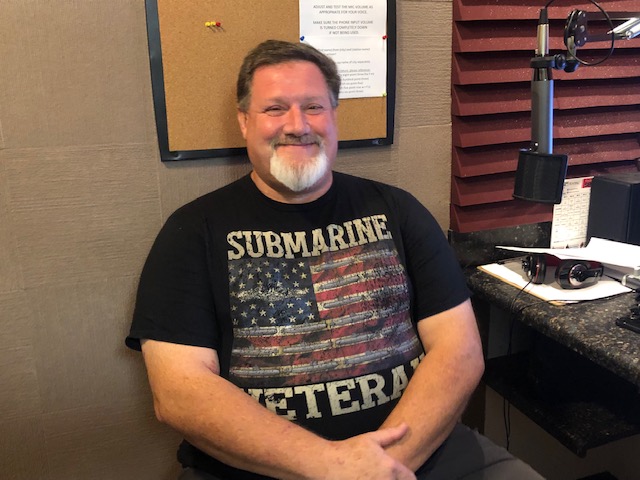 Q: What is your full name?

A: My name is Randall Wayne Bennett

Q: What was your rank?

Q: What was your branch of service?

A: I served in the Navy for 8 years. I rode on a submarine, the USS Stonewall Jackson. I started off as a yeoman, which is a secretary—a 227 lb. secretary. When I went into the National Guard after the Navy, I became a 77W, which was for water purification. I was in the Lineville unit which did tours (I didn’t do them), but the unit did tours in Iraq and Saudi and multiple other places around the US for things like Katrina.

Q: Where did you serve (stateside or overseas)?

A: Most of my stations were here in the states. My final duty station was in Charleston at the Naval base until they closed it. I rode submarines and people think we’re crazier than special forces guys. We do things that most people won’t. We live in a steel tube that can be crushed by water at any moment. So from one moment to the next, you never know whether you’re going to live or die.

Q: What’s something you remember most about serving?

A: What I remember most are the guys I served with. On a submarine, it comes down to everybody knowing everything about the submarine. You have 18 months to earn your dolphin or your fish, which is a submarine warfare pin. And the guys who earn them before you ride you very very hard. Because in a moment’s notice, if something goes wrong, and you’re the closest one to it, if you can’t fix it, you have to get somebody else. Well , in just a few minutes that can cause a submarine to be gone. Multiple incidences have happened—both the Thresher and The Scorpion, they were both lost with all hands because a valve wouldn’t close.

Q: If you could say something to those who want to serve, what would you tell them?

A: Actually I’m of the belief that everybody should serve that is able bodied, at least 2 years. And I think the President should be a military veteran because how do you operate something you know nothing about? And I think that in order to be a citizen, you should have to serve.

Q: If you could, would you do it again and why?

A: Yes, in a heartbeat. I’m one of 22 million veterans and I think every one of us could do it again would. As a matter of fact, when Desert Storm started up, I volunteered  to go back to active duty, and I was told ‘we don’t need anybody there—stay where you’re at’.

I actually think that if you have a high school dropout, given them the ASVAB, give them the choice – go back to school or go into the military. There’s a lot of things in our country today that need to be changed but we can’t do it until we start with ourselves.