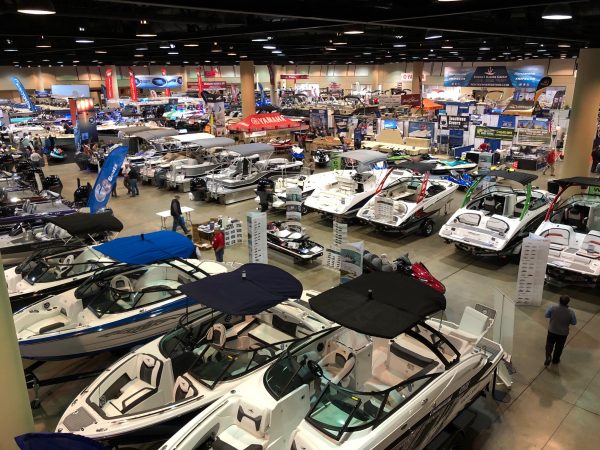 BIRMINGHAM, Ala. – For 47 years, the Birmingham Boat Show has attracted hundreds of thousands from around the nation to the Birmingham-Jefferson Civic Center. With more than 45 vendors throughout the exhibit halls, boats, accessories, and local Sylacauga-area dealers can be seen around every turn.

Lee Holmes with Sylacauga Marine & ATV has been a part of the show since its inception thanks to his dad, the founder of the company. Now, Holmes co-owns the successful business with his brother Ray and Rob Peoples.

“My dad was one of the original people to ever come in the boat show,” said Holmes. “I’ve been doing this ever since before I was even a worker. I was just hanging out running around — around a 30 year range. A long, long time. It is absolutely family tradition.”

Holmes’ business prides itself on being Alabama’s #1 Nitro dealer.

“We’ve been really successful in doing this and bring in customers in from a long way. We’re even a little better than that. We’re actually a top-five Tracker dealer in America – not just Alabama – and we are the second-largest Nitro dealer for about 10 years running now — in America.”

“It’s a huge deal,” said Cara Davison, VP of Sales for Tracker. “Lee, Rob, and Ray — they’re at the dealership and tremendous dealers for us. Tracker’s volume is tremendous. We are the top boat builder in the world and these guys represent us very well.”

Represented so well in fact, returning customers keep coming back for more — like retired US Army Veterans Robert and Virigina Ames. They just bought their second boat: the 40th Anniversary Special Edition Tracker.

“I’ve always enjoyed fishing. I like to look at the water. I like to write on the water. That’s why I like boating. I love to fish,” said Virigina.

Davison talked to SylacaugaNews.com about Tracker’s Special Edition boat. “It’s our bass tracker boat. Our founder John Morris, founded the company 40 years ago in 1978. When we went to market, we went to market for the first time ever in the industry with a boat motor, trailer package for $2,995. And so he brings this back 40 years later at $9,995,” said Davison.

For Holmes though, it’s not all about boat sales.

“I think it’s probably the people more than anything. Some days it gets stressful. It’s a job just like anybody else has got,” said Holmes. “But I enjoy what I do. I enjoy coming to work every day. I enjoy talking to people and solving problems and seeing happy families and things like that. I kind of just like my boat. I think that’s how we’ve been so successful. We look after them, hard.”

“I think a lot of it for [Sylacauga Marine & ATV] is their customer service,” said Davison. “They have a tremendous amount of customer service and endeavors. They really care about the customer and about our product to they’re trying to put their best foot forward when representing tracker for sure.”