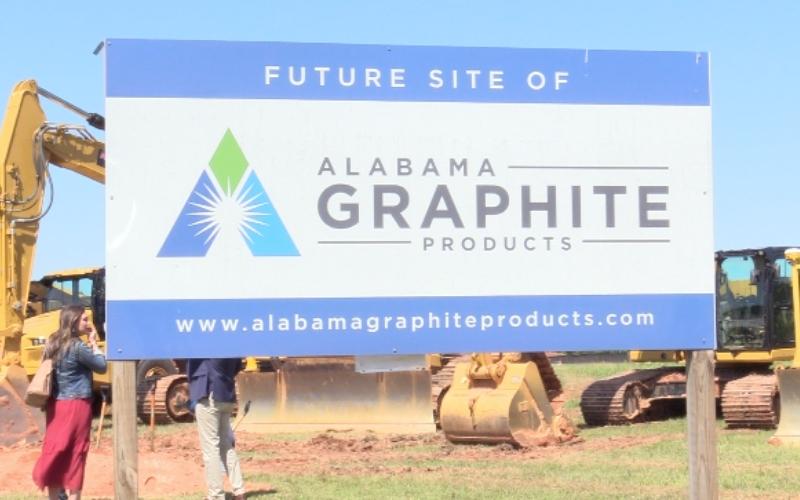 KELLYTON, Ala. – A host of guests, including Gov. Kay Ivey and Rep. Mike Rogers, were on-hand Tuesday morning, April 19, to celebrate the groundbreaking of a first-of-its-kind graphite-processing plant.

At 10:00 a.m. this morning, a list of public officials spoke to the public about the new Alabama Graphite Products plant. The new processing plant will put Alabama at the forefront in regards to the production of materials that go into lithium-ion batteries. These batteries will power such things as electric vehicles and other green energy equipment.

“The world is in on Alabama’s secret,” said Gov. Ivey, “and that is that we are a powerhouse in automotive manufacturing. The Alabama Graphite Products plant will no doubt put Alabama at the nation’s forefront in producing a critical material needed for success.”

Alabama Graphite Products is a subsidiary of Westwater Resources, and Westwater’s goal as a company is to explore and develop “U.S.-based mineral resources essential to clean energy production.”

Westwater’s initial investment for the first phase of production is more than $200 million. Once in operation, the plant will process 7,500 tons of graphite annually and will eventually double that amount.

“The reason [new industry] comes here is due to the great work ethic,” Rep. Rogers said. “Not only is the state very business-friendly, but folks here know how to show up to work and get their jobs done.”

The plant will be located at 218 McClellan Industrial Dr. and will bring 100 new jobs to Kellyton and Coosa County.

You can watch the full press conference and ceremony on the 60th episode of Behind the Headlines which will premiere this Saturday, April 23, at 10:00 on the SylacaugaNews.com Facebook page.