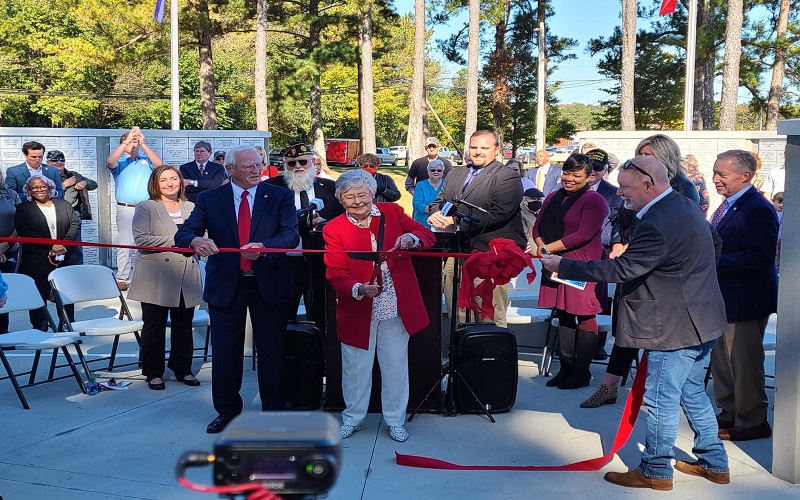 SYLACAUGA, Ala. – With Veterans Day approaching, many state officials including Gov. Kay Ivey were on-hand to witness the official opening of the Veterans Honor Wall at Pinecrest Park Tuesday.

A project under development for the last decade and a half, the Veterans Honor Wall was the brainchild of late Mayor Sam Wright and the outgoing Parks and Recreation Director Jim Armstrong.

On Tuesday, their vision was fully realized.

“Since 2006, we’ve worked on this a long, long time,” said Armstrong. “To me, Sylacauga can be proud that we have honored our veterans in this way.”

Gov. Kay Ivey took the lectern at the commemoration to speak about the sacrifice of the veterans and to share her personal experience with the armed forces. Her father was a Captain in the military and even fought in the Battle of the Bulge during World War II.

“It’s great to be back here in Sylacauga to celebrate our new memorial,” Ivey said, “but it’s even more important that we’re here to honor the men and women who have fought to protect our freedoms. It’s my honor to join so many veterans that are here today.”

Also speaking at the unveiling were Sylacauga Mayor Jim Heigl and Dennis Murphy, Chaplain of the American Legion Post 45.

[WATCH] Business of the Month, May 2022 – Garris Specialties