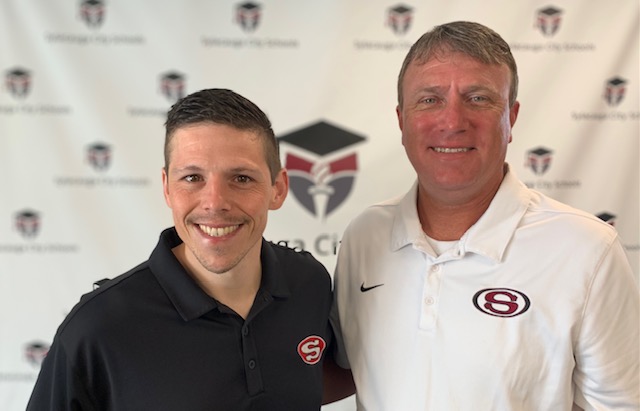 SYLACAUGA, Ala. – Sylacauga City Schools officially announced the hiring of its new volleyball coach Wednesday morning, and it is one that should excite the Aggie fanbase.

It is not often you can hire a recent state champion, and even more rare to lure a coach away from the program where those titles were won. However, that is exactly what Sylacauga was able to do with James Clendenin. The 35-year-old is coming off two state titles in three seasons (2019, 2021) at The Donoho School in Anniston, and will now inherit a program that was in the state tournament last season under coach Rebecca Paterson.

“The thing that excited me the most is the chance to coach at a 5A school,” said Clendenin. “I’m excited to be in a community that loves sports as much as I do.”

Clendenin is versatile and passionate about the game, coaching both club ball and in high school. Clendenin is the co-creator/director of TBS Volleyball Club in Calhoun County, and co-creator/director of Southjamm Volleyball Indoor/Outdoor Club in Anniston. These programs were created to teach girls ages 10-18 a range of sports-specific skills and conditioning sessions. Clendenin has coached at Oxford and Weaver before being approached by The Donoho School in 2018. When he inherited the Donoho program, the team won just seven matches the year prior, and missed the postseason for the first time in three decades. In his first season at Donoho Clendenin won 31 matches. In the three years since, Clendenin took Donoho back to prominence. The Lady Falcons played for a state title each of the last three seasons, winning two. In 2021, Donoho finished 52-9, and defeated Bayshore Christian in straight sets to win it all.

Clendenin told The Aggie Sports Network to expect a really strong defense on the court, and a team that attacks fast after finding an advantage.

“I’m excited about coach Clendenin because he brings a lot to Sylacauga City Schools,” said direct of athletics Chad Wilkinson. “He has a phenomenal coaching background. He has great leadership skills. He can develop players. He can develop coaches.”

Wilkinson described the hire as a long-term hire as Clendenin will be the third coach in three seasons for the volleyball program. “[Stability] can take our volleyball program to the next level. The longevity of [this hire] will be awesome for our school system.

Watch full interviews with Clendenin and Wilkinson below:

In 2019, Clendenin was named the 1A-7A Volleyball Coach of the Year by the Alabama High School Athletic Association. He was also named Teacher of the Year in 2016-2017 at Weaver Elementary School and Calhoun County, and was Teacher of the Year in 2014-2015 at Golden Springs Elementary School. Clendenin is a 2010 graduate of Jacksonville State University where he earned a degree in elementary education. In addition to being head volleyball coach, Clendenin also will be teaching at Sylacauga High. His first day with the players on the court will be Thursday.

Clendenin is married to his wife, Sarina, and has one son, Jason.