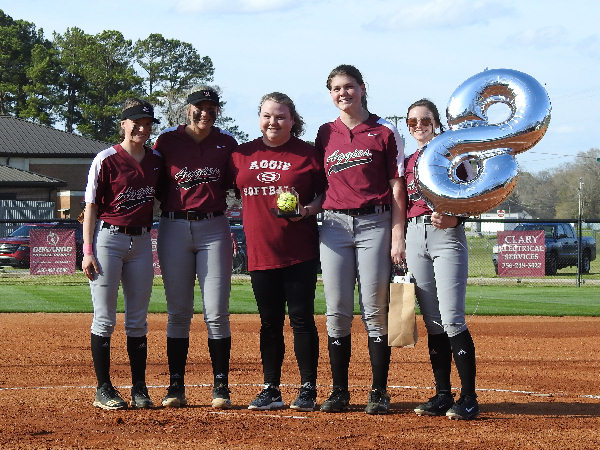 SYLACAUGA, Ala. – After weeks of weather related cancellations, the Sylacauga Aggies finally got to play their much anticipated home opener last night against Childersburg.

In pregame festivities, the Aggies honored Heaven Harris, a former Aggie softball and current SHS senior. Heaven, who lettered as a seventh grader for Sylacauga, was injured in an ATV accident in 2015 and lost her pitching arm due to the severity of the accident.  Not letting that hold her back and having learned to hit, catch and throw with one arm, she returned to the field in 2016 with the junior high team. Following the conclusion of the 2016 season, Harris made the tough decision to walk away from the game.

In front of a packed house Thursday night, Harris threw out the ceremonial first pitch to her long time catcher and friend, Neeley-Scott Wilkinson who wore the #8 jersey in her honor.  Heaven was named honorary team captain for the 2020 season and was also asked by the senior players to be their team manager.

The night’s contest got underway shortly after pregame activities and was scoreless after one inning of play.

The Aggies had a huge second inning, scoring eight runs on the Tigers.  Sylacauga held an 8-0 lead through five innings until Childersburg’s bats heated up in the top of the sixth.  The Tigers were able to cut the lead in half, scoring four runs on four hits.

The Aggies held on to take the 8-4 victory to improve their overall record to 6-5.

Sylacauga’s offensive leaders were Ivey Waller who went 2 for 3 with two RBI’s and a run scored and Madison Martin was 2 for 3 at the plate with a run scored. Kaylei Horn also had one hit and scored once for the Aggies.

Defensively, the Aggie’s middle infielders were solid as shortstop Brighton Clary had five assists and two putouts and second baseman Kaylei Horn came up with 4 putouts of her own.

Lorel Bryant earned the win in the circle, pitching six innings.  She gave up four runs on four hits and struckout seven batters.

The Aggies head to the Talladega County Tournament at Lincoln High School today and will face Munford in the opening round at 1:30 pm.

Made for You
Jake Owen
Greetings From...Jake
Listen Live