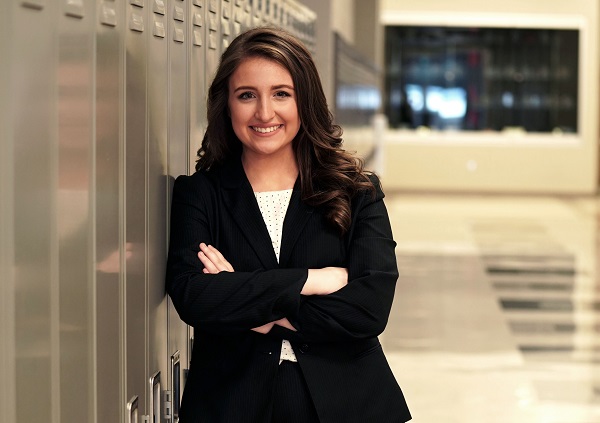 Alabama Girl’s State is a premier youth leadership program sponsored by the American Legion Auxiliary (ALA). The program epitomizes the ALA’s mission to honor those who have brought us our freedom through our enduring commitment to develop young women as future leaders grounded in patriotism and Americanism. The young women become knowledgeable of the democratic process and how our republic form of government works at the state and national levels.The 76th Session of ALA Alabama Girls State where Dickson and Sanders were elected was held at ​The University of Alabama June 10-15, 2018.

Throughout the week, delegates learn how to do parliamentary procedure in legislation, elect for government officials, and almost all 400 of the girls who attend run for some type of office. City, county, and state officials elected.

There are two parties in Girls State – the Nationalists and the Federalists. Dickson was a Nationalist and went against 13 other girls for for the title of the Governor of the Nationalists Party Nominee. Dickson then went head to head with the Governor Nominee for the Federalists Party. Dickson’s campaign included her catch line, “Get Jiggy With Ibby.” “It served as a hit with a large majority of the girls and was a catchy phrase they could easily remember when voting,” said Dickson.

Through the phases of competition, Dickson made multiple speeches and underwent multiple rounds of what is called “Whistle Stops.” During the first round, a committee from each party creates two questions to ask their governor candidate.

“As I got higher and higher for the position as Governor, I had to go through multiple whistle stops where anyone from the crowd could ask me any type of question,” said Dickson. “From ‘What is your opinion on legalizing marijuana?’ to ‘How can you fix the opioid crisis?'”

At Girls State, delegates are also able to create their own bill to debate in legislation. Dickson’s bill was Prescribing Opioid Policies for Medical Practitioners. Unfortunately, time ran out and the House and Senate were not able to debate, pass or veto the bill. Once a bill was passed through the House and Senate, Dickson was able to either sign off on the bill or veto, after she was elected Governor.

She also had the privilege of meeting Governor Kay Ivey, along with several government officials, tour the Governor’s mansion and capital, eat lunch with President Bell of the University of Alabama, and was offered a full tuition scholarship to UA. “I had my last speech on Wednesday night and it was announced on Thursday morning that I was elected as Governor,” said Dickson “Keziah Sanders was also selected as the Attorney General. The top three positions at Alabama Girls State are Governor, Lt. Governor, and Attorney General. So two Sylacauga girls got in the top three!”

In addition, each city at Girls State elects one person to interview to attend Girls Nation in Washington D.C this summer. Sanders and Dickson were both elected as the city nominee. “I was honored to be chosen as second alternate for the position as Girls Nation attendee,” said Dickson. “It was a crazy week, but overall one of the best weeks in my life. I was able to learn, grow, and meet 400 of the most intelligent and impactful girls in our state. It was a week I will never forget.”

Dickson got another surprise when she received a video from Auburn University’s quarterback, Jarrett Stidham. In the video, Stidham wished Dickson a happy birthday and congratulated her on being elected Governor. Dickson is a huge Stidham fan, and while on a tour of Auburn University a few months ago, asked her mom for a video from him. This dream came true when a friend of his sent the video below to Dickson’s mom. “It meant so much to me, and yes, I did cry a whole lot,” said Dickson. “A little too much.”

I. Am. About. To. Pass. Out. THANK YOU @jarrett_stidham8 THANK YOU!!!! For anyone who knows me, y’all know that I’m probably close to dying but whatever CUZ THIS JUST HAPPENED. Currently sobbing right now but it’s fine because this is the one of the best moments OH MY GOSH!!!!!! @grace.leighann @kjforag @clairalinee @parker_alp @alfdickson