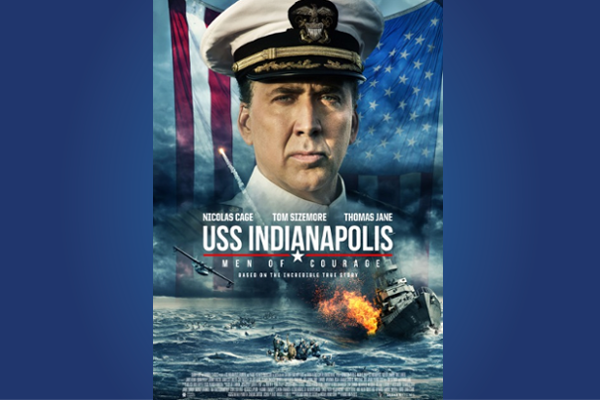 MOBILE, Ala. – Aside from serving as one of the nation’s premier battleships during World War II and being a top tourist attraction for the State of Alabama, the USS ALABAMA now has another claim to fame: doubling as the USS INDIANAPOLIS.

USS INDIANAPOLIS: Men of Courage began principal production in Mobile last summer. After months of filming, primarily on the ALABAMA and in and around Mobile, the film was released Friday on video-on-demand with a limited release in theaters on November 11. The film stars Nicolas Cage, Tom Sizemore, and Thomas Jane.

“I’m excited this project is finally coming to screens,” said former USS ALABAMA Executive Director Bill Tunnell. “It’s a great story. From what I have seen, it should be thrilling but also one that is also highly successful.”

The INDIANAPOLIS was known as one of the most versatile and fastest ships during World War II. President Truman gave orders to Captain McVay for a new mission: to transport a new secret weapon to Guam. That weapon contained components of what would ultimately end the War. After the mission was complete, the crew was en route back home when McVay received new orders to head to a Pacific island for training purposes. A Japanese submarine spotted the INDIANAPOLIS and fired several torpedoes at the ship causing it to sink within twelve minutes. More than twelve hundred men were on board with nine hundred surviving. After several days in the Pacific, enduring countless shark attacks, more lives were lost — all while being searthed for by the U.S. Navy.

The $40 million dollar film was produced by Hannibal Classics, a production company that has filmed several films in the Port City within the last four years.

“We are very proud of the movie and can’t wait for audiences to finally get to see it,” said Executive Producer Richard Rionda Del Castro. “We thank everyone in the City of Mobile and the Alabama Film Commission for all of their efforts in getting the movie made.”

“It’s hard to believe the movie is finally coming out,” said writer and producer Cam Cannon. “We worked for many years to bring it to fruition and there were so many times that I thought it was going to fall apart. Thanks to Mario Van Peebles, Richard and the other producers — not to mention the talented cast and crew in Mobile — we pulled it off.”

Editor’s Note: Managing Editor of SylacaugaNews.com Michael Brannon had a role in the film as a news reporter interviewing Captain McVay after he exits court at the end of the film.