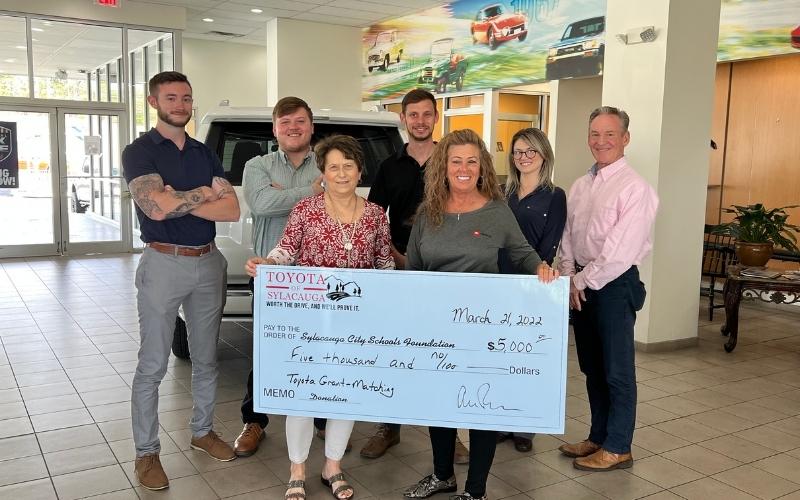 SYLACAUGA, Ala. – After two more donations to the Sylacauga City Schools (SCS) Foundation, Toyota of Sylacauga is coming very close to a benchmark in philanthropic work for local education.

To earn Chair status with the SCS, an individual, organization, or business must donated a total of $25,000. As of today, the Sylacauga dealership has given $21,870 to the Foundation.

Toyota of Sylacauga donated two checks totaling $6,050 this month to the SCS.

The first was a $1,050 check for the deal that has been in place with the SCS since last January. For every new vehicle sold by the dealership, Toyota donates $30 to the Foundation. This amount represents 35 new cars sold by Toyota in the month of February.

The other check was in accordance with the Toyota National Grant-Matching Program. Toyota of Sylacauga submitted the SCS Foundation as an applicant for the program and they were chosen. That check’s amount equaled $5,000.

These contributions directly affect learning across all curriculum areas for students in the SCS by providing needed equipment, supplies, and teaching manipulatives to enhance learning for the students.

The SCS Foundation was created in 1988 by Dr. Joseph B. Morton and was one of the first educational foundations of its type in Alabama and the nation.

Since the SCS was founded, there have been 61 total Chairs donated and over $1.3 million given to teachers through grants. This has affected more than 367,000 students.