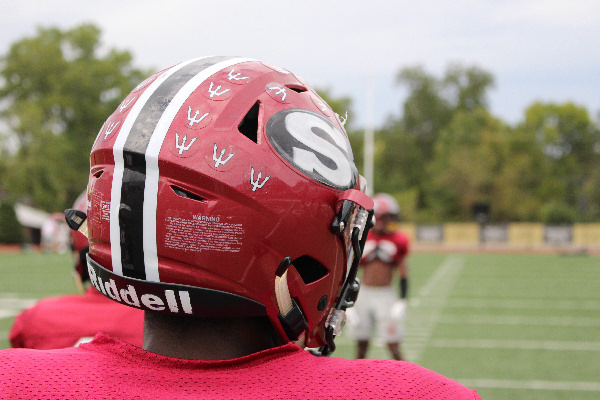 You could say the playoffs begin Friday night for Sylacauga High School.

Friday’s regular season finale at Legion Stadium in Sylacauga boasts the definition of “postseason implications.”  Sylacauga must come in to the game with a postseason mentality, because this final game versus Munford is a playoff for the fourth and final playoff spot in Class 5A Region 5.

In Region 5, Mortimer Jordan, Clay Central and Center Point have all clinched a playoff spot leaving one final spot remaining for Sylacauga or the Lions from Munford.

If you feel deja vu, you’re not crazy. The Aggies were in the exact same scenario in 2018 and prevailed over the Lions 34-28 in a thrilling second half, come from behind victory.

The postseason bid on the line won’t be the only similarity from this year to last. If you remember, it was a chilly, wet, sloppy night at Munford. This Friday has rain in the forecast and the temperatures could get down into the mid-50s. However, a wet turf and game is not something Sylacauga will shy away from. Heck, it’s probably the type of conditions Sylacauga can thrive in.

Sylacauga is unapologetically a run first and run heavy team. The running back room consists of two 1,000 yard rushers in Sophomore Maleek Pope and Senior Jordan Ridgeway. The more ground and pound the better for the Sylacauga offense, and if the weather can make Munford one-dimensional on offense, that is a win-win for the Aggies.

Munford will walk onto the field at Legion Stadium with a 5-4 overall record and 3-3 in the region. The Aggies will come in 7-2 overall and 4-2 in region play.

Although the Lions are 5-4 overall, they do have a few impressive wins under first year coach Michael Easley, and have a played a fairly tough schedule in 2019. Munford opened the season with a loss at 6A Oxford, and beat rival Lincoln handily, 24-10. Lincoln went on to clinch its 4A region last week for the second consecutive season.

So, Friday night is unofficially the start of the playoffs for Sylacauga. Win and advance. If you fall, quite frankly the season is over. On Friday night these two teams will battle it out with everything they have worked for on the line.

Kickoff is scheduled for 7:00. Pregame coverage on The Aggie Sports Network and Yea!106.5 begins at 5:00 with The Star Physical Therapy Kickoff Show. Live video coverage starts at 6:30 on AggieSportsNetwork.net.