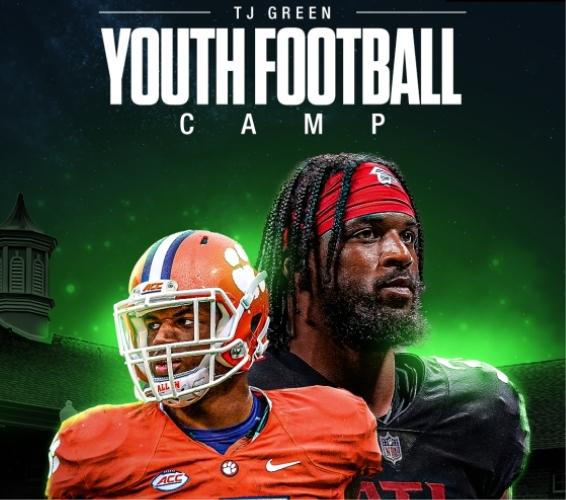 The youth camp is free of charge and open to kids aged 6 through 18.

Green, along with other unnamed current and former NFL players, will teach the campers the basic fundamentals of the game as well as some more intermediate and advanced strength and conditioning skills.

Each camper will be provided snacks, lunch, and plenty of water throughout the day. They will also get a free t-shirt to wear during the training sessions.

Before attending the camp, participants must be registered online at tjgreenfootballcamp.com. In the registration instructions, it asks that campers bring their own cleats, water bottle, and personal equipment such as braces or wraps.

In high school, T.J. Green was a playmaking wide receiver and safety for the Sylacauga Aggies. After being recruited to play receiver for the Clemson Tigers, Green made the switch over to defense to play safety in between his freshman and sophomore years.

Once establishing himself in his new position, Green would play in 11 games his second year on campus before earning the starting job his junior year.

After completing a stellar junior campaign which saw his Clemson team play for the national championship, Green entered the 2016 NFL Draft where he was selected in the second round by the Indianapolis Colts.

In two years with the Colts, Green featured in 31 games and made 11 starts. Over that time, he recorded 87 total tackles (63 solo) and three pass deflections.

Green left the Colts following the 2017 season and has bounced around the NFL since spending time with the Seattle Seahawks, New Orleans Saints, Carolina Panthers, Atlanta Falcons, and Houston Texans.