Up On The Housetop
Gene Autry 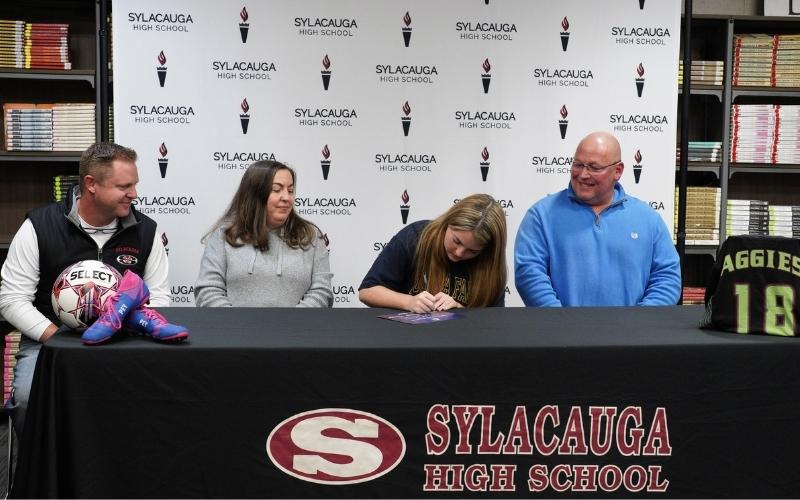 SYLACAUGA, Ala. – Peyton Fricks has played varsity soccer for the last five years at Sylacauga High School (SHS), and before entering her sixth and final year with the Lady Aggies, Fricks has determined where she will continue her playing career.

Ficks signed her letter of intent to play for the Screaming Eagles in a packed SHS Media Center on Tuesday afternoon, Oct. 18

Toccoa Falls is an independent member of the National Christian College Athletic Association (NCCAA) that competes in the South region of the Division II level.

With a final two of Toccoa Falls and Lenoir-Rhyne, the decision was easy after Fricks took a visit to the picturesque campus that borders the Chattahoochee National Forest.

“It was gorgeous,” Fricks said when describing the scene at Toccoa Falls. “The campus was beautiful, and it just really felt like home.”

Fricks noted that Toccoa Falls’ head women’s soccer coach, John Drouse, reminded her of Sylacauga head coach Nick Grogan. That comparison stuck with Fricks and made her more comfortable when choosing her next step in her soccer career.

For Grogan, the admiration is reciprocated.

“She’s been an excellent player for us,” said Grogan. “I couldn’t be more proud of her and her journey into where she’s going. I think she’s done a great job.”

Grogan pointed out that although Fricks has played almost every position on the field for the Lady Aggies, she projects has a defensive midfielder at the next level for the Screaming Eagles.

With Fricks gearing up for her senior season, she hopes the team can build on their success of last year where they knocked off Pike Road in the first round of the playoffs on penalty kicks before falling to John Carroll Catholic.

“This year, I think we’re going to have a really good team,” Fricks said, “and I see us going to the Final Four in Huntsville.”