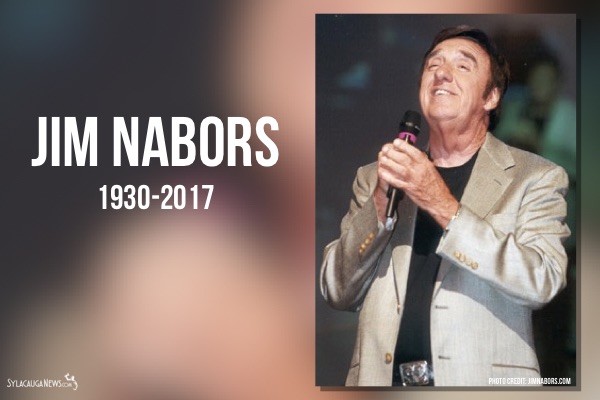 SYLACAUGA, Ala. – Entertainer and Sylacauga native Jim Nabors died Thursday at his century-old plantation-style home in Diamond Head on the Hawaiian island of Oahu.

According to family friends, he had reportedly fallen earlier and was briefly hospitalized with pneumonia. He was 87 years old.

Born in Sylacauga on June 12, 1930, Nabors was best known as Gomer Pyle on both the Andy Griffith Show and Gomer Pyle U.S.M.C. He was a popular guest on more than a dozen television shows from the 1960s through the 1980s including The Sonny & Cher Show, The Love Boat, The Muppet Show, The Lucy Show, The Smothers Brothers Comedy Hour, and Knight Rider.

Gomer Pyle U.S.M.C., which ran for a total of 150 episodes on CBS from 1964-1969, was one of the decade’s most successful television series, always placing in the national Nielsen ratings’ top 10, finishing at number two. It was followed by The Jim Nabors Hour from 1969–1971.

In 1976, Nabors moved from California to Hawaii, where he owned a 200-acre macadamia farm and residence on Maui before selling it to the National Tropical Botanical Gardens in 2002.

Nabors recorded 28 albums and numerous singles, with six certified Gold or Platinum. He received a star on the Hollywood Walk of Fame in 1991.

For more than 30 years, Nabors sang “Back Home Again in Indiana” at each Indianapolis 500, stepping back in 2014 due to health reasons. The Hulman-George family, owners of the Indianapolis Motor Speedway, spoke highly of Nabors as “not only a treasured friend, but truly a cherished member of our family. We will never forget his genuine kindness, sincerity and loyalty. He was a wonderful man who inspired millions of people across the globe every May and throughout his entire life.”

In conjunction with a “Jim Nabors Day” celebration hosted by the Sylacauga Chamber of Commerce in October 1978, U.S. Highway 280 in the Sylacauga area was named the Jim Nabors Highway.

Nabors was a graduate of Sylacauga High School and The University of Alabama.

Yours
Russell Dickerson
Yours
Listen Live