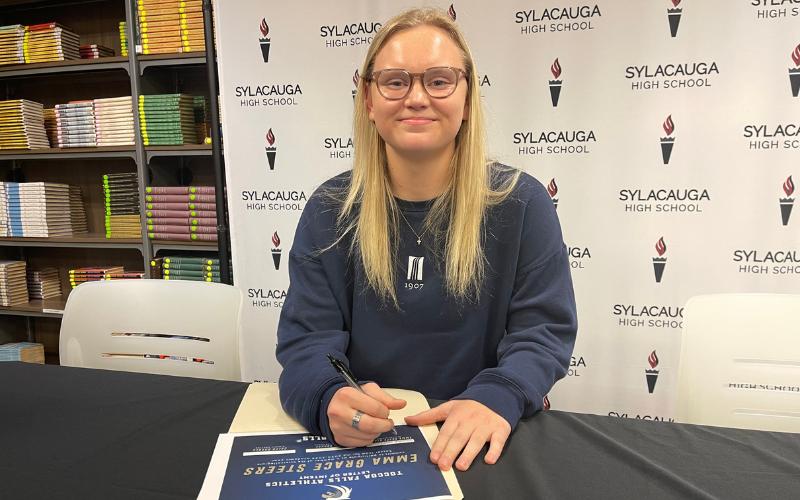 SYLACAUGA, Ala. – Emma Grace Steers, a standout senior center back for the Lady Aggies stellar defensive back line, has chosen where she will continue her soccer career in college.

After being recruited by multiple schools at the next level, Steers decided that she felt most at home in Toccoa Falls, Georgia.

“It was small there, and I didn’t want to go at a big university,” explained Steers, “so it was kind of like God answered my prayers. It’s a Christian college. It’s everything that I want in a college.”

Steers became aware of Toccoa Falls through her teammate and friend Peyton Fricks, a defensive midfielder that signed with the Screaming Eagles back in October of last year.

“When [Peyton’s] parents talked about Toccoa, it sounded like something that I’d want,” Steers said. “It was just smooth sailing from there, and I really enjoyed the [recruiting] process.”

Now, two key pieces of a Sylacauga defense that was tough to score on all last season and held Pike Road scoreless in a first round, penalty shootout victory in last year’s playoffs are heading off to play college soccer together for potentially four more years.

“Definitely, our strength has always been defense over the last couple of years,” said Head Coach Nick Grogan, “and [Peyton and Emma Grace] have been big reasons why that is.”

Emma Grace is the taliswoman and main organizer of the defense, according to Grogan, and she and her counterparts will hope to build on the success of last season with a deeper run in the playoffs this go-around.

“I think if we work as a team and start off strong, I think we can make it as far as possible,” Steers expressed. “We all love each other, and we’re excited about the opportunities ahead.”

The Lady Aggies begin their season Friday, Feb. 10, at the Golden Goal Tournament in Albertville