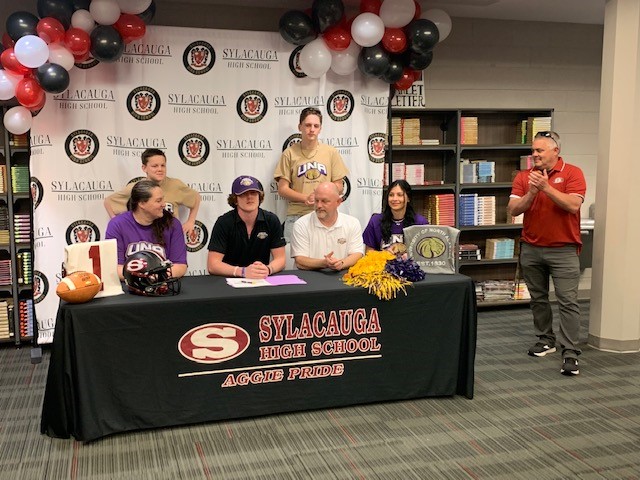 SYLACAUGA, Ala. – The Aggie football signal-caller for the last two seasons has made his college decision official.

On Friday at Sylacauga High, Edwards officially accepted a preferred walk-on offer from the University of North Alabama while surrounded by friends, family and teammates. “Today was awesome,” Edwards said. “I am really close with everyone that was here, and I’m glad I could spend this day with them.”

Edwards told SylacaugaNews.com he plans to come in and compete to the best of his ability at UNA, just like he had to do two years ago when he transferred to SHS. “I just want to get better overall. Follow the leaders on the team, do what my coaches say, and then eventually get to a position where I’m  competing for a starting job.”

The recruiting game has changed drastically in the last few years for smaller schools, especially for quarterbacks. The transfer portal is making it hard for high schoolers to get looks from colleges. Edwards said the portal was a challenge in the recruiting process. “It was definitely a challenge. It started out really slow,” Edwards explained. “Once the portal started to slow down, I got calls from a few coaches and the offer from UNA. That’s when I made my decision.”

Edwards won’t be going to UNA alone. He will join his Aggie teammate Maleek Pope in Florence. “We’ve always had a really good connection on the field together, and it’s going to be fun to go play with a player as good as he is,” Edwards said.