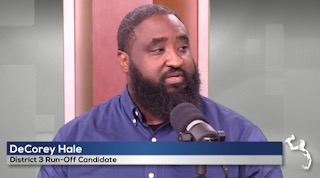 SYLACAUGA, Ala. – Weeks after the Sylacauga municipal election, two candidates are now in a runoff for District 3.

DeCorey Hale and Nate Brewer will runoff for the position on Oct. 6. Donnie Blackmon occupied the seat for four years.

After two email invitations to both candidates for a debate, SylacaugaNews.com was declined both times by Nate Brewer. DeCorey Hale accepted both invitations.

SylacaugaNews.com has decided to pursue an event only with Hale.

“We are committed to informing the public so they can make the best decision when it comes to who they will elect for public office,” said Michael Brannon, Managing Editor of SylacaugaNews.com and Vice President of RadioAlabama. “We regret that Mr. Brewer respectfully declined our invitations and accept. We are glad to welcome Mr. Hale on our platform. We are happy to bring this event to the pubic and we hope it will help people make informed decisions about who they will vote as their next District 3 councilman. It’s important, especially in this day and age, to have honest and transperant reporting of facts. It’s most important when it comes to elections. Having candidates explain themselves in more ways than one, gives them a platform to express their viewpoints, opinions, and agenda ultimately allowing for better informed voters.”

A special candidate forum with Hale will air Sunday night on the SylacaugaNews.com Facebook page starting at 8:00 p.m. Rules and format remain the same for Hale.