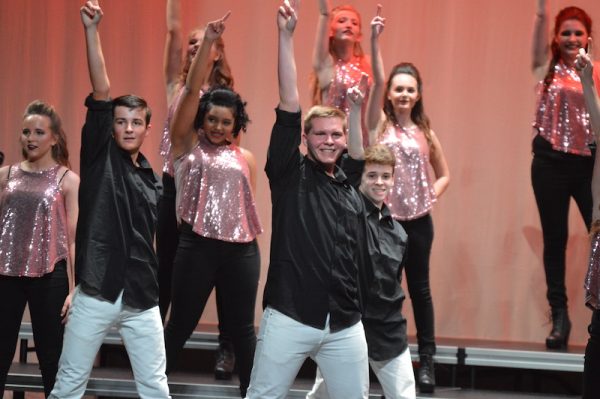 In the true fashion of a show choir, the students even had a quick costume change from more formal attire to a more casual look. The performance was filled with outstanding dance breaks and the upbeat songs had the audience clapping along. After presenting all the songs, the students took a well deserved bow and stormed off the stage.

Following the performance, Tidwell explained more about the upcoming performances and introduced the seven members of the live band, most of which are members of the high school marching band. Tidwell thanked all in attendance and invited guests to a reception in the lunchroom.

“This is a huge thing for our students,” said Tidwell. “None of these students have ever had the opportunity to compete in a show choir competition.”

To conclude the event, Dr. Todd Freeman, Sylacauga City Schools Superintendent, praised the students for their hard work and determination and then proceeded to wish the group the best of luck in upcoming competitions.

“My heart is so full,” said Freeman. “The arts are so important. It causes us to be creative…kids find their voices here.”

The show choir will compete twice during the month of February, first in Opelika on February 11 and then on February 18 in Homewood. The community is encouraged to attend the events to show support for these students within the community.

Spectators felt that the students did an outstanding job and are more than prepared to compete next month at competitions.

Teachers have donated $75,000 to Sylacauga Schools over last 30 years for the SCS Foundation