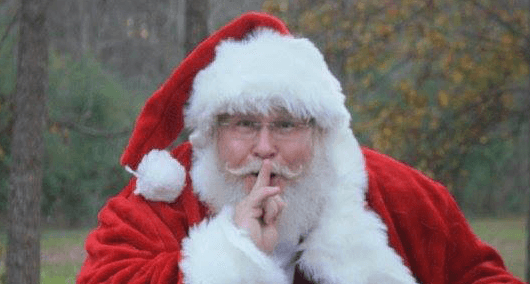 SYLACAUGA, Ala. — Sylacauga resident Bryan Taunton, Pastor of ChristPoint Community Church, transforms into Sylacauga’s very own Santa Claus each holiday season. It all started in late 2015 at the Sylacauga City Schools Foundation’s “Breakfast With Santa” fundraiser, where Taunton was asked to be the event’s Santa Claus. The success of his role at the Breakfast With Santa event opened Taunton up to private bookings and an ultimate role as Santa in the 2015 Sylacauga Christmas Parade. Following the parade, Taunton was booked for more events, raising approximately $1500.00 for The Arc of South Talladega County.

The process of becoming Santa is a rather extensive process, four hours to be exact. To best mimic the hair color of Santa Claus, Taunton undergoes a bleaching process and then sits under heat lamps which activate chemicals to dye the hair. The hair and beard are then checked for any tweaks needed. A toner is then applied that develops the snow white hair color so strikingly similar to Santa Claus.

Taunton says his favorite part about being Santa is making children happy and seeing their belief come true. Before making home visits, Taunton learns about the children he will be visiting in order to discuss things only Santa could know. However, the job does not come without its downsides. Taunton does not enjoy being used as a tool of discipline. Taunton refuses to threaten children with presents, instead just encouraging good behavior.

Like any Santa, Taunton says he enjoys all Christmas cookies. He also encourages children to remind their parents to leave red bell peppers for the reindeer, especially Rudolf.

After the holiday season, Taunton will shave his beard to remove the snow white color. He will then begin to regrow it, only trimming it moderately throughout the year.

Taunton is hoping to raise over $2500.00 for The Arc of South Talladega County this year. For more information or bookings, visit SantaMagic.biz.