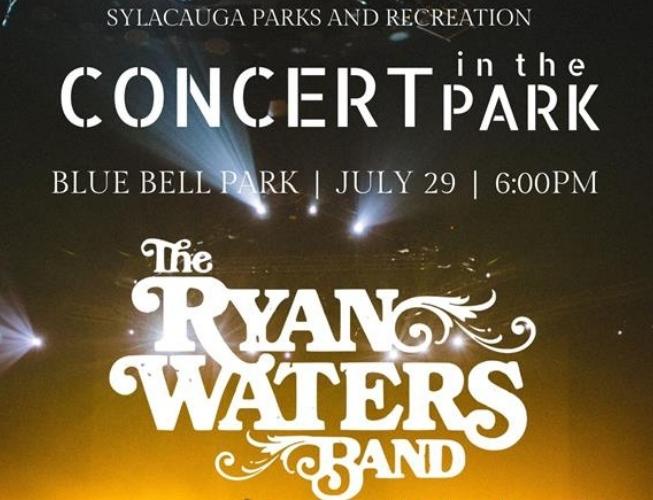 SYLACAUGA, Ala. – The Sylacauga Parks and Recreation will be hosting a Concert in the Park and cornhole tournament on Friday, July 29, at Central Park across from Blue Bell Creameries.

The concert is free of admission and will begin at 6:00 p.m.

Included in the festivities will be two different cornhole tournaments. The first, a Blind Draw competition ($10 per person) for single entrants, will also start at 6:00 p.m. with the Bring Your Own Partner tournament ($20 per person) getting underway immediately following. Fly High Cornhole is running the tournaments.

For the live music, Brian Congdon will open for The Ryan Waters Band.

“Hailing from Luverne, Alabama, the Ryan Waters Band is no stranger to small town life and real country living,” said Waters who put out the well-received single in April of 2022. “The song ‘In Out Here’ literally describes my life to a T.”

Today, Ryan Waters and his band have a growing following of loyal listeners and have been streamed on the social media platform TikTok over 3.5 million times.

An assortment of food trucks that frequent the Sylacauga area will be on-site. That list includes Simone’s Kitchen ATL, Seafood Queens, Corry’s Food Truck, and SnoBiz.

The Sylacauga Parks and Recreation is hosting its very first Concert in the Park and hopes to offer even more events moving forward.

For more information regarding the Sylacauga Parks and Recreations current and upcoming programs and events, visit sylacauga.recdesk.com.