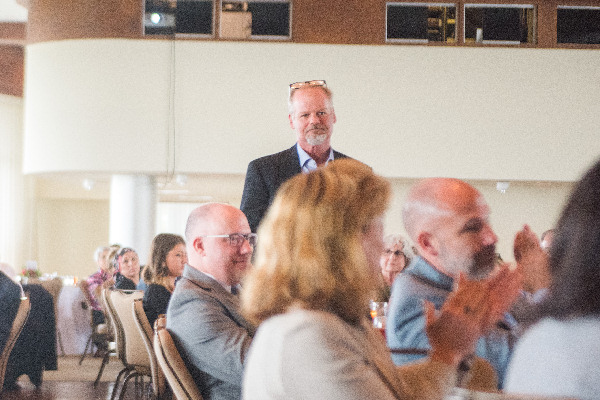 SYLACAUGA, Ala. – Sculpted from Sylacauga marble, the new Alabama Humanities Fellows Award created by Craigger Browne captured the spotlight at The Colloquium with a special unveiling and its inaugural presentation to the 2019 class of Fellows.

The sculpture depicts the lens of a magnifying glass, the symbol of searching and discovery, wrapped in the flames of enlightenment and desire.

The magnifying glass is convex in the front and concave in the back, creating what he described as “a glowing translucency in the center, further emphasizing that burning flame from within.”

To be chosen to create the award is “a great honor,” Browne said at the Colloquium. “It is great to be associated with Alabama Humanities Foundation.”

Following the Fellows’ conversation on stage, Browne noted during his own comments, “The more I speak, the more I realize how similar the journey is – the passion within us to discover.”

He cited one of the Fellows who received the award, Civil Rights attorney and activist Fred Gray, who represented Rosa Parks. During the Colloquium, Gray talked of having “a plan” to right wrongs in the state. “The quest for answers rather than pointing out problems” was the theme of Gray’s comments as well as other Fellows in the discussion, Browne said. “When you listen to the panel, they wanted to fix them, not just complain about them.” 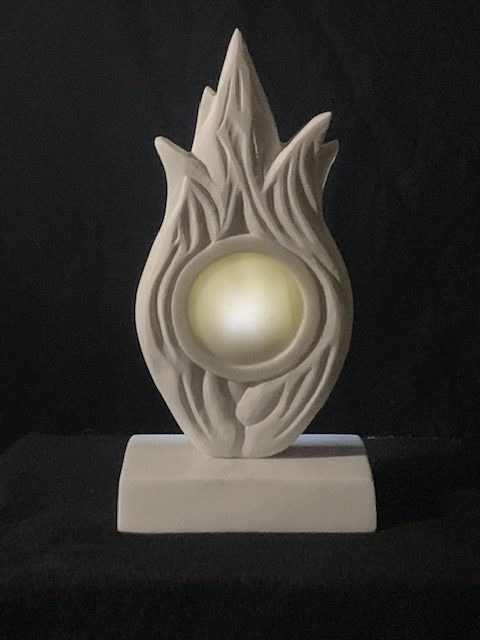 After graduation from Vestavia Hills High School and earning a Bachelor of Fine Arts degree from the University of Montevallo, Browne traveled to Lacoste, France, in 1990 to study at the Cleveland Institute of the Arts. He became an assistant sculpture professor there in 1991.

In 1992, he received a four-month Guggenheim scholarship to work and study at the Peggy Guggenheim Collection in Venice, Italy.

Then, at the recommendation of Peter Rockwell, Norman Rockwell’s son, he moved to Carrara, Italy, to work with its quality white marble, previously used by artists such as Michelangelo and Bernini.

For more than a decade, Browne divided his time between Italy and his studio in Birmingham. Then, in 2011, he discovered Sylacauga as the source of beautiful marble – the same marble used in the award.

In a television interview leading up to the 2019 Sylacauga Marble Festival, Browne noted, “I kind of laugh because I went halfway around the world looking for the finest marble in the world, and I actually grew up 45 miles north of this source.”

His sculptures are found in public, corporate and private collections on five of the seven continents. His recent works include: