Half Of My Hometown
Kelsea Ballerini feat. Kenny Chesney 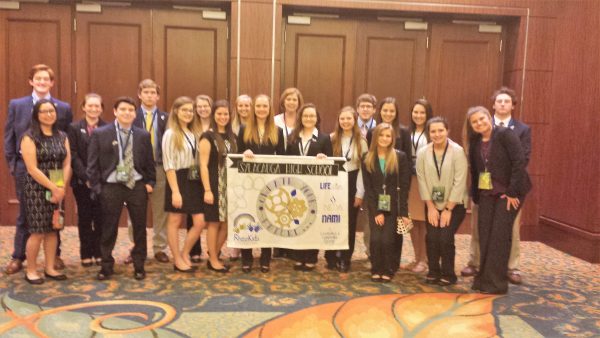 SYLACAUGA, Ala. – Twenty-two Sylacauga High School students participated in the state HOSA (Health and Occupational Science Association) competition in Montgomery at the end of February and twelve placed in the top six of their competitive fields.

Reanna Whetstone had a third place finish in Physical Therapy, where she took a written test on knowledge content and a skills test to be judged on her ability to demonstrate two specific skills.

The Public Health I group was comprised of Henley Burton, Tyler Carter, and Faith Richardson, and this group placed third in their division. Public Health II group was Morgan McKinney, Emma McGrady, Madison Clark, and Jordyn Basinger, who came in sixth place. The Public Health groups were required to prepare and teach a presentation on the assigned topic “Teen Dating Violence.”

Mary Wilson competed in the category of Job Seeking Skills and had to submit a cover letter and resume and be interviewed for a job in a health care profession. She placed sixth in her event. Additionally, Wilson was named HOSA Member of the Year for Alabama.

Wilson, Whetstone, and those in Public Health I group will advance to the national competition in Dallas, Texas, later this summer.

Lisa McGrady is the coach and advisor for the HOSA team. She expressed her pride in all of the students who went to the state competition by pointing out how seriously they took their preparations for competition.

“They have worked so hard preparing for their events, right down to the last details of how they dressed and conducted themselves,” she stated. “HOSA is growing every year not just at Sylacauga High, but all over the state, so the competition is getting tougher. The seniors in this group have been with me for four years. It is hard seeing them leave, but I am so proud of what they have achieved.”