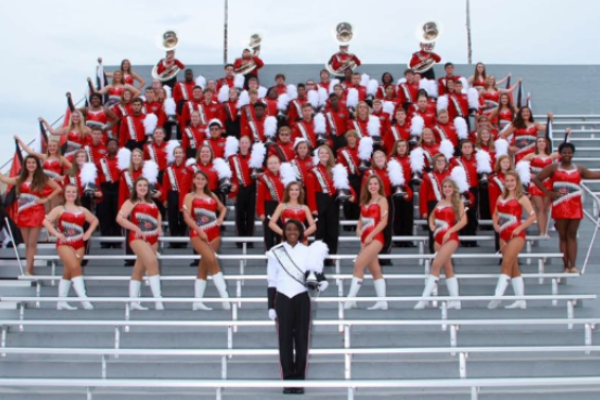 “With this being the last competition of the season, the kids of Sylacauga Marching Aggie Band really wanted to leave their mark, and they definitely did so. With getting all superior ratings at the Troy festival, they achieved it,” said band director Ryan Murrell. “It was a great victory for the students and we couldn’t be more proud of them.”

The patriotic themed show entitled “An American Celebration,” was a hit at all three competitions the Band participated in this fall. It not only received superior ratings at the Troy Marching Band Festival on Saturday, but also at the Lake Martin Invitational in Alexander City and the Dixie Jubilee Jam over the previous two weekends.

“Being my first year at Sylacauga, I am very lucky to work with the great students and staff of the band program,” said Murrell. “Everyone has really stepped up their game in order to be very successful and I know they are going to do so with pride!”

Nearly one hundred band members, including helpers, created the magic on the field and can still be seen for the remainder of the football season at halftime.

“The kids have worked really hard this season to achieve great things,” said Martez Tidwell, assistant director. Tidwell said the foundation was laid during the Simpkins era at SHS. “I’m so excited for the future of the band program and working with such a great staff.”

“I’m extremely proud of the of the SHS band leaders and their dedication throughout the season,” said Samuel Childs, assistant director and middle school band director. “They helped all the first year marchers have a successful rookie year.”

The SHS band program is already working on concerts from the Sylacauga Symphonic Band. The first holiday concert of the year will be Thursday, Dec. 15, at 7:00 p.m. at the Sylacauga High School auditorium in a joint concert with the Nichols-Lawson Middle School Band.

Editor’s Comment: The SHS Band, long referred to as the “Half-Million Dollar Band”, is theoretically worth $4,996,950 based on inflation adjustments. Former band director Buddy Simpkins told SylacaugaNews.com that sports reporter Zip Newman of the Birmingham News watched the Sylacauga band perform at the Dixie Bowl in 1948. He said the band was so good it was invited back in 1949, noting that “if the University of Alabama’s Million Dollar Band is worth a million dollars, then the Sylacauga Band was so good, they’re worth at least a half-million dollars.”