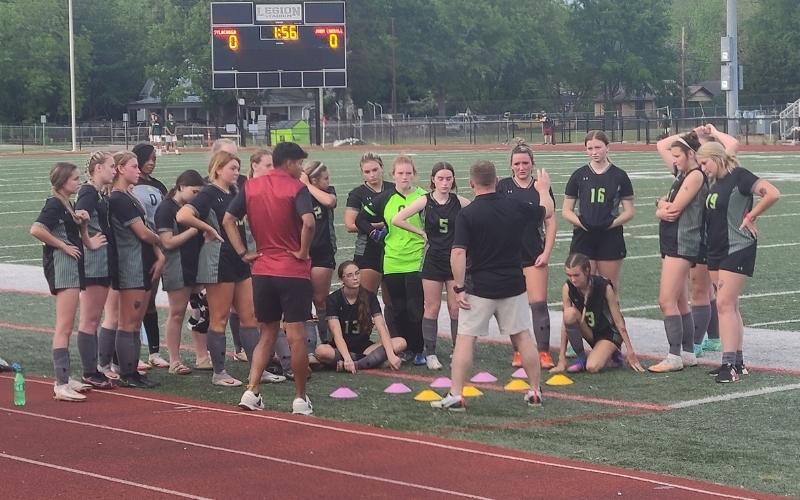 SYLACAUGA, Ala. – Despite a resilient defensive effort by the Sylacauga Lady Aggies, the girls soccer team fell 2-0 to John Carroll Catholic on Tuesday night.

Going into the contest, Aggie head coach Nick Grogan knew that his team’s success thus far had come from the stalwart, organized defense that the team’s foundation was built on.

However, that defense had quite a challenge ahead of it: attempting to keep a prolific John Carroll Cavalier attack at bay.

Through the first 40 minutes, everything was going according to plan. Although John Carroll had a large majority of the possession, Sylacauga had limited the Cavaliers to no real clear cut chances. Besides a couple of good attempts from long range, the Aggies’ goal had not been threatened.

At halftime, the score was still even at 0-0.

“We’re asking them to park the bus right now,” said Coach Grogan at the half. “We make sure that we’re clearing everything and taking away any opportunities. We teach defense as ‘pressure, cover, balance.’ We’re a defensive team. That’s our strength, and we play to our strengths.”

By “pressure, cover, balance,” Grogan requires his team to press the ball at all times while rotating on the backside to cover open lanes and channels that passes could be made into. For almost an hour of game time, it had worked almost to perfection.

Then, the breakthrough came for John Carroll.

Early in the second half, after causing an overload on the right flank, a cross found the right foot of left winger and sophomore Anna Grace Fuller. She buried the chance to give the Cavaliers a 1-0 lead.

About 12 minutes later, a very similar situation occurred. Once again, Fuller didn’t miss her opportunity. The sophomore’s brace was all John Carroll needed.

Although the girls’ season is over, Grogan was immensely proud of their grit and determination and knows that there was no lack of effort from his team.

Sylacauga lost the possession battle to John Carroll, only keeping the ball for 42 percent of the game. Aggie goalkeeper Sydney Ezekiel amassed an impressive 20 saves.

John Carroll moves on to the quarterfinals where they’ll take on Indian Springs.