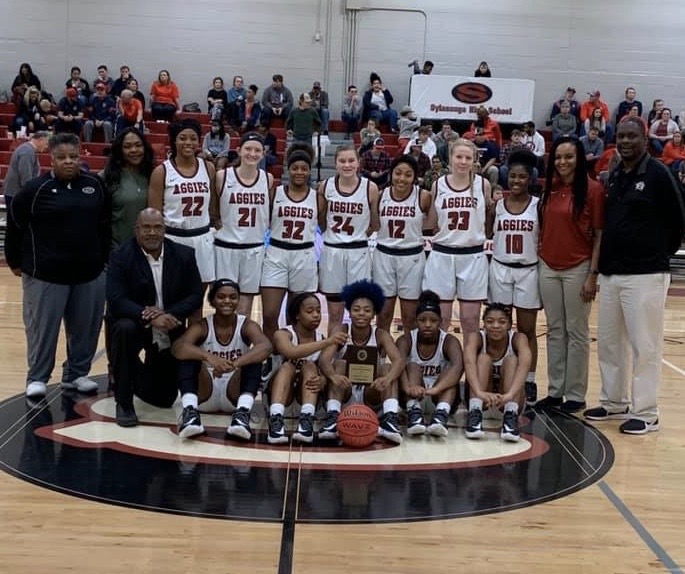 SYLACAUGA, Ala. – Sylacauga basketball reigns once again as area champions.

Earlier this week, Sylacauga girls won a thriller over the Clay Central girls to claim the area trophy. The boys also knocked off Clay Central by 47 points. Now the two teams move forward to the official first round of the postseason.

With the sweet 16 on the line, both programs will host the first round. Sylacauga’s girls will either play Ramsay or Briarwood on Monday at 7:00. The Lady Aggies have played Briarwood close twice this year, losing both by a combined seven points.

The boys will either host Woodlawn or Ramsay. Sylacauga topped Woodlawn last year in the first round in thrilling fashion before falling to Ramsay in the region finals in Montgomery. The boys will play Tuesday with tip-off scheduled for 7:00.

“Every game from now on is the biggest game of the season. It’s survive and advance,” said Sylacauga Head Coach Kent Fullington. “No matter who we play next week, our guys will have to come out and play their best basketball, because Woodlawn and Ramsay are state championship-caliber basketball teams.”

Listen to both games on the official broadcast partner of Sylacauga High School athletics – The Aggie Sports Network on Yea!106.5. Also listen on AggieSportsNetwork.net by clicking the listen bar, the Yea!106.5 app, TuneIn, iHeartRadio and Amazon Alexa-enabled devices. Listen directly by clicking here.