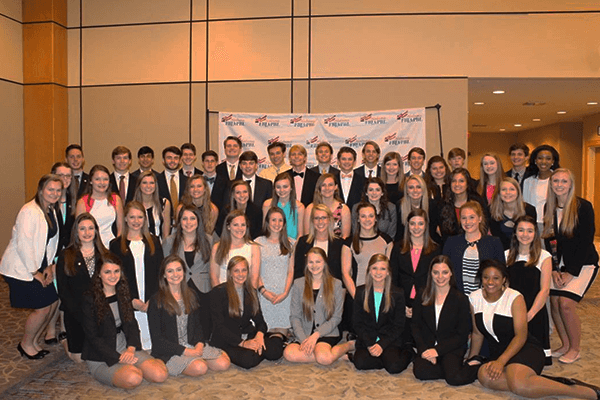 BIRMINGHAM, Ala. – Sylacauga High School’s Future Business Leaders of America chapter brought fifty-four students, more than any other school in its district, to the 66th Annual State Leadership Conference in Birmingham.

Bringing more members than any other school in the region would be just the first of many unique feats Sylacauga FBLA accomplished.

With such an impressive showing in competitive events, SylacaugaNews.com sat down with one competitive event winner, Allexus Phillips. Phillips won tenth place in the Community Service Project event at the 2016 national conference, is a senior at Sylacauga High School, and currently serves as Sylacauga FBLA’s Vice President. To succeed in this year’s Partnership With Business Project competitive event, Phillips spent months preparing. The project itself consisted of working with the Sylacauga Chamber of Commerce as part of the Digital by Design initiative. Following project completion, Phillips wrote a 15 page report on the project development, implementation, success, and role of business leaders and FBLA members involved in the project. This pre-judged report was combined with a seven minute presentation on the same topics as the report.

“FBLA has taught me so much over the years. Through not only this Partnership With Business Project competitive event, but other competitive events, service projects, and experiences, I have learned skills that will help me tremendously in college and the work force. I cannot say enough about my FBLA advisers; they are the reason why Sylacauga FBLA has been Alabama FBLA’s Most Outstanding Chapter thirteen of the past fourteen years,” added Phillips.

Sylacauga FBLA was awarded the most prestigious title of the entire conference: Alabama FBLA’s Most Outstanding Chapter, a feat the chapter has earned thirteen of the past fourteen years. Sylacauga FBLA was also named a Gold Seal Chapter, received the Outstanding Level of the Blueprint for Success state project, recognized for raising the second most amount of money – $6000 – for FBLA’s national charity, March of Dimes, and awarded for having the second largest membership figure – 143 total members – in its district.

Three individual members, Davis Laye, Caitlyn McTier, and Jack Wilbanks, were awarded for completing one of the upper levels of the Business Achievement Awards, an individual awards program. McTier and Wilbanks also won the District V Who’s Who Award, an award recognizing the most accomplished individual FBLA members.

Sylacauga FBLA is led by Laye, Allyson Craddock and Pamela McTier and is the largest student organization at Sylacauga High School.