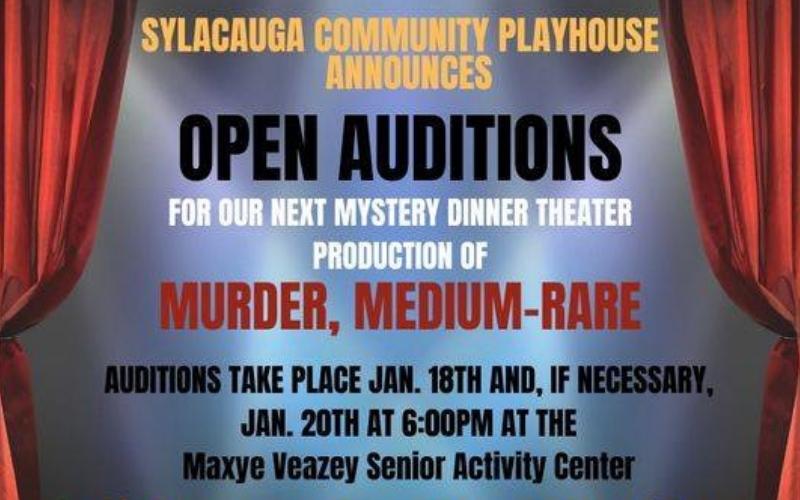 SYLACAUGA, Ala. – The Sylacauga Community Playhouse (SCP) is holding tryouts for its upcoming production.

Auditions for “Murder, Medium-Rare” will be held at 6:00 p.m. on Tuesday, Jan. 18, and if necessary, Thursday, Jan. 20, in the Maxye Veazey Senior Center  This murder mystery dinner theater show will take place at Giovanni’s Italian Restaurant in Sylacauga on March 4-5. This is the second dinner theater production SCP has hosted with the first being “The Mafia Murders” in 2018.

Unlike most theater productions, dinner theaters require plenty of improvisation and have very little, if any, scripting. Therefore, due to the nature of the show, auditions will be entirely improvised.

The casting list for “Murder, Medium-Rare” calls for five men and three women. If cast, practices will regularly be from 6:00 p.m.-8:30 p.m. on Tuesday and Thursday nights. In order to be cast, one must have current SCP membership (not required to audition) and pay a cast fee equal to the ticket price to cover their meal.

“Murder mysteries are one of SCP’s favorite genres to produce,” said Director Jodi Courington. “From the performers standpoint, they get to stretch their wings and have fun with their character. More importantly, the actors get to interact with the Sylacauga community as audience members are an active part of the show and introduce some unexpected twists and turns to the plot.”

If you’d like to assist with the production but do not wish to act, contact Courington about helping in other roles such as House Manager or Assistant Director.

Courington hopes that the improvisational aspect of the show doesn’t deter people from auditioning.

“You will be given some personality traits and a scenario and asked to improvise with other actors,”Courington explained. “There is no right or wrong.  Have fun with this, it’s a comedy!”

Auditions this week for SDPAC’s production of Big Fish