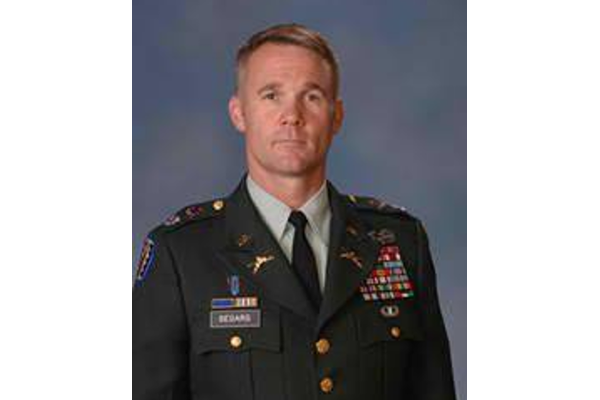 SYLACAUGA, Ala. – Dr. Jon Segars, Director of Career and Technical Education at Sylacauga City Schools, has been inducted into the inaugural class of the Reserve Officers’ Training Corps (ROTC) National Hall of Fame. Segars is a retired lieutenant colonel from the U.S. Army with a 27-year career in proven leadership all over the world.

A military graduate of North Georgia College, Segars earned a degree in business management, a master’s degree from Kansas State University, and completed his doctorate at Auburn University. He also is a graduate of the U.S. Army Command and General Staff College and the National Defense University. Commissioned in 1988, Colonel Segars served in a variety of Armor, Cavalry, and Infantry positions during his military career.

After commissioning as a lieutenant of Armor, Colonel Segars served as a cavalry platoon leader in the 197th Infantry Brigade at Fort Benning, Georgia, and later with the 24th Infantry Division during Operations Desert Shield and Desert Storm.

Following graduation from the Infantry Officer Advanced Course and promotion to captain, he served as a battalion maintenance officer at Camp Casey, Korea, a tank company commander at Fort Carson, Colorado, and a cavalry troop commander at Fort Bliss, Texas. Beginning in 1997, Colonel Segars served with the Fifth U.S. Army and later with the 91st Infantry Division as a small unit team leader in support of Army National Guard training and combat preparation in Washington, Oregon, California, and Hawaii.

In 2001, Colonel Segars graduated from the Army Command and General Staff College and was assigned again to Fort Benning to serve as battalion executive officer in the 3rd Infantry Division during Operations Enduring Freedom and Desert Spring in Kuwait, and subsequently Operation Iraqi Freedom. During the U.S. military’s initial occupation of Baghdad in early 2003 and prior to the unit’s redeployment to Fort Benning, he was selected as the 3rd Brigade, 3rd Infantry Division operations officer and served in that position until transferring to Joint Task Force North in 2004. With this assignment, Colonel Segars served as the team chief for U.S. and Canadian border operations, and a visiting instructor to the Canadian Land Force Staff College. Colonel Segars’ final active duty assignment was the Professor of Military Science at Auburn University from 2007 through 2010.

After retirement, Colonel Segars continued his service with the U.S. Army Cadet Command as the Senior Army Instructor in Junior ROTC at Auburn High School from 2010-2015.
Colonel Segars’ military decorations and awards include the Bronze Star Medal for valor in combat with one oak leaf cluster, the Defense Meritorious Service Medal, the Combat Action Badge, the Ranger Tab, and the Parachutist Badge.

The inaugural ROTC National Hall of Fame class consists of 326 elite former cadets from around the nation, and Colonel Segars is one of two inductees from Auburn. There are more than 650,000 ROTC graduates in our nation’s history. The event was held at Fort Knox, Kentucky, in conjunction with the 100th anniversary of ROTC.
Segars and his family moved to Sylacauga in 2015 when he was named director of Career and Technical Education at Sylacauga City Schools. He and his wife, Joy, have a young daughter, Mary Grace.

Superintendent Dr. Todd Freeman said, “Dr. Segars’ experiences in the United States Army are assets to Sylacauga City Schools and the community. He is acknowledged by his peers in the military and education as an exceptional leader. Dr. Segars and the Career and Technical Education team are moving our programs to their greatest heights.”