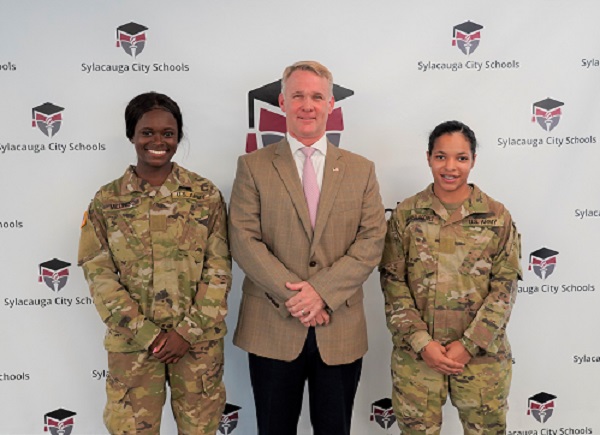 SYLACAUGA, Ala. – During the monthly board meeting of Sylacauga City Schools, two Sylacauga High seniors were applauded for their service in the United States military.

Private First Class Maria Gomez and Private Shania Milliner enlisted in the U.S. Army split-option program this past summer and after graduation, will continue with their training to begin their military careers.

“Today we are still in the longest standing war in American history, and the quality of our soldiers, sailors, airmen and marines continues to get better. Recent Department of Defense reports suggest that less than 30 percent of our nation’s young people are eligible for military service and fewer than one half of one percent of the U.S. population serves in the military at any given time. Our service members are clearly the best of the best, and I would like to recognize two of our own heroes,” said Dr. Jon Segars.

Segars said the ladies have lived their entire lives seeing the ugliness of war by the honor of military service.

“These ladies have taken an oath to support and defend the Constitution of the United States against all enemies foreign and domestic. They have also promised to follow orders which will certainly land them in places and situations that most people can’t imagine. They have entered the Army under the split-option program where they attended basic training over the summer and will move on to their advanced individual training after they graduate in May. Both will serve in the Army Transportation Corps and already have military occupational specialties dealing with the movement of soldiers and supplies on the modern battlefield. They both enlisted in the military to make a difference in this world, and I guarantee that they will,” Segars said.

Listen To The Music
Doobie Brothers
Listen to the Music: The Very Best Of The Doobie B
Listen Live