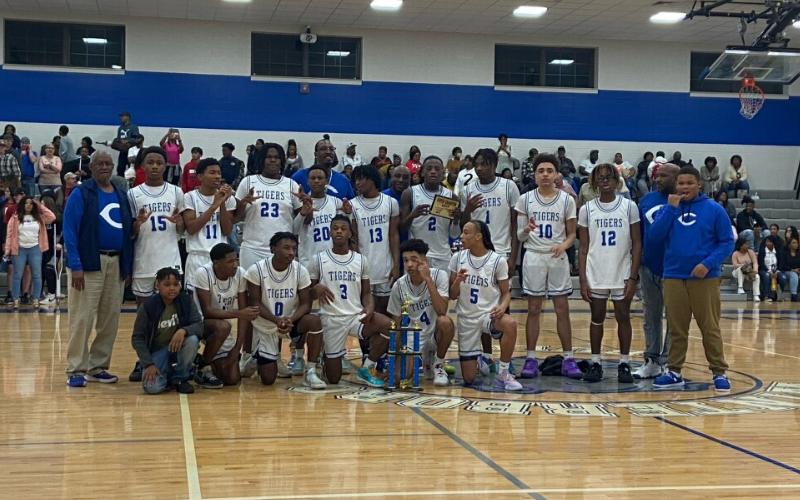 Lamonyn Burnin and his Lady Bulldogs fell behind early and never really recovered. Coach Rebecca Williams and the Lady Tigers took control of the game and never looked back to win the Super Championship.

In the nightcap, the Sylacauga Aggies and Childersburg Tigers went at it for the only time this season, and it turned out to be exactly what everyone expected. There were people turned away from the door as an overcrowded gym watched a dandy Super Championship for the boys.

Childersburg raced out to an early lead, only to see Coach Kent Fullington’s Aggies fight back to take a one point lead late in the game. The Tigers were able to respond though despite their early foul trouble and retake the lead for good.

Coach Johnny Johnson said, “Our leadership was great tonight. Sylacauga puts an enormous amount of pressure on you, and we handled it pretty well. We rebounded well and hit our free throws down the stretch to get this Super Championship.

The 54-45 win improved the Tigers record to 17-2 as they head into back-to-back contests with the number two ranked Midfield Patriots to decide the area championship and who will host the upcoming area tournament.

Monday’s game is at Midfield while the Patriots come to Childersburg on Tuesday. Tuesday’s contest can be heard on the Tiger Sports Network on KiX 100.3 with the voices of Childersburg High School Athletics, David McCurley and Robert Sprayberry.