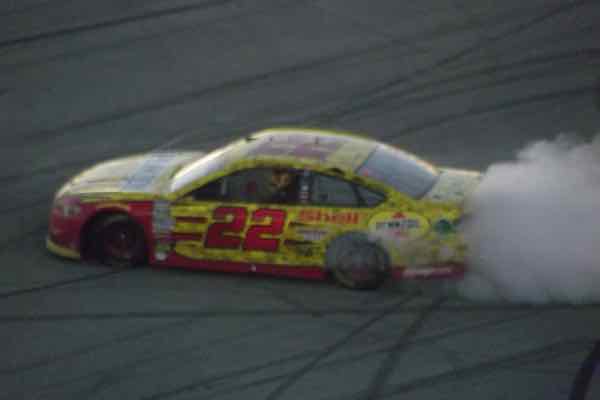 TALLADEGA, AL – Sunday’s action at Talladega Superspeedway saw smiles and a few frowns as the NASCAR Sprint Cup Series made it’s second trip to the 2.66 mile tri-oval in 2016.

When you think of Talladega, you think of the “big one” that leaves bent sheet metal and debris strewn across the track at some point during the race. However, in this round, there was no “big one” to speak of other than the big names who will not move on to the Round of 8 battling for the chance to hoist high the NASCAR Sprint Cup Series trophy at Homestead next month.

Logano punches ticket to Round of 8

Joey Logano and the No. 22 Shell Pennzoil Ford team did not have the perfect Hellmann’s 500 on Sunday but by the last lap in a green-white-checkered overtime, he was in the perfect position and able to hold off the field to seal the win, sending him to the Round of 8. Logano and his Penske teammate Brad Keselowski have combined to win four of the last 5 restrictor plate races, which showed with the win on Sunday. Rounding out the Top 5 were Brian Scott, Denny Hamlin, Kurt Busch and Ricky Stenhouse Jr.

During the course of the Hellmann’s 500, Brad Keselowski in the No. 2 Ford and Martin Truex Jr in the No. 78 Toyota, two drivers who were picked as title favorites, suffered race ending and ultimately season ending engine failures. Truex had his motor go up in smoke just 41 laps into the event and Keselowski lost his engine on lap 144 after leading 90 laps on the day.  Both drivers now join Austin Dillon and rookie Chase Elliott, the other two drivers eliminated, watching to see who will conquer all and take the 2016 title.

Tony Stewart made the decision late in the 2015 season to retire from driving in the Sprint Cup Series at the end of the current season. This past weekend Stewart made his final laps at Talladega Superspeedway, finishing 32nd on the day and spent most of the day in the back of the pack, which was his game plan. In his thirty five Sprint Cup starts, Stewart had an average starting position of 16.8 and an average finish of 17.9, recording one win in the fall of 2008. On lap fourteen on the race, fans stood and saluted “Smoke”, the 3-time Sprint Cup series Champion as they watched him run his last race, the Hellmann’s 500 at Talladega Superspeedway.

NASCAR returns to Talladega for the GEICO 500