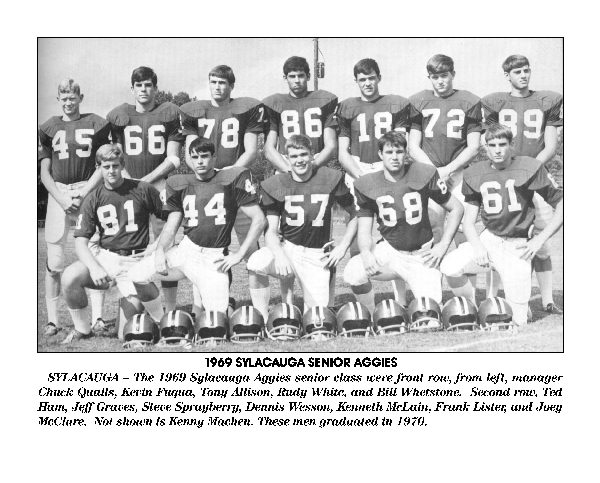 This story via Coach Earl Lewis

Among the 28 state championships in a variety of sports officially claimed by Sylacauga High School are five in football.  Four of those are what are referred to as Mythical Championships.  That indicates they were selected through polls of coaches and sportswriters or by a point system similar to those used to crown college national champions in the old days

After years of debate, the Alabama High School Athletic Association finally started a state playoff system in 1966 replacing the old selection method. Three years later, Sylacauga’s first appearance in the playoffs came in 1969. Coach Calvin’s ’69 squad made good use of its first opportunity by winning the State Class 3-A Championship.  This month marks the 50th Anniversary of that glorious season. How time flies.

The 1969 team was unique in many ways.  They were a close-knit group, and the entire squad exuded confidence without being cocky. 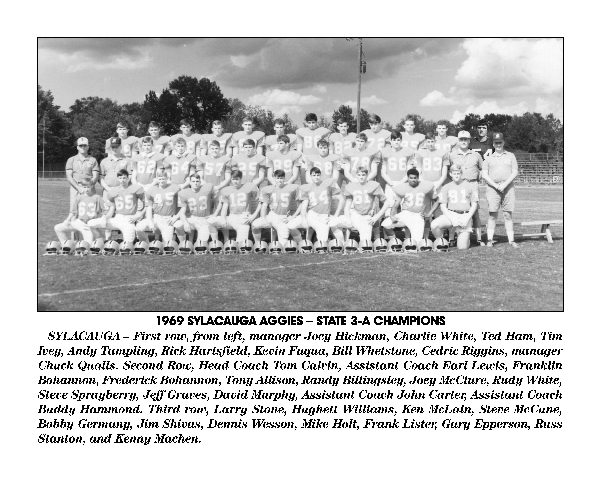 Other squad members, all of whom made valuable contributions at various times were Andy Tampling, David Murphy, Joey McClure, Jim Shivas, Mike Holt, and Charlie White.

There are many good stories about this team.  One concerns the rumor that circulated among the players during spring training that line coach John Carter was considering returning to South Georgia after only one year with the Aggies. When Sprayberry and Whetstone, two of the team captains, got wind of the rumor, they cornered Carter and expressed their wishes that he stay around. During the conversation, they promised to win the State Championship if he would stay.  You know the rest of the story, Carter stayed, and Sprayberry and Whetstone were two of the main cogs in the championship season that fall.

Another story involves the Childersburg game.  Although the Aggies were favorites, Childersburg was a dangerous opponent in the second game of the season.  Well, the Tigers upset the Aggies 21-0 in a driving rainstorm. Coach Calvin sent me to Prattville that night to scout our next opponent.  I carried my wife and my two young children with me in a pickup truck with only one seat and the idea that the family would attend the adjacent county fair while I scouted the Prattville team.  It started raining just as we arrived at the football field, and my family had to stay in the truck the entire game.

My scouting notes were a soggy mess, and you can imagine what kind of a mood my wife was in when the game was over.  Driving home we tried to find scores on the AM radio. When we got to Rockford we finally got an Alex City station, and heard the announcement that Childersburg had beaten SHS 21-0. I commented that the score had to be a mistake, but when we got to Legion Stadium, we found it to be true.

Steve Sprayberry still remembers today what an outstanding job Coach Calvin did of calming the waters after a loss that could have been devastating.  He never came down with harsh criticism.  Instead, he transmitted a positive attitude, and the players stayed on board.  We beat Prattville 26-20 the next week, and that led to nine consecutive wins and the championship.

Another story also involves Sprayberry, and he may shoot me for telling this one.  We were playing Lanett down there in game six, and Steve was getting some dirty play from the guy across the line.

Finally, Sprayberry had enough and chased the Lanett player down and slugged him after receiving a cheap shot. That was out of character for Steve, but never-the-less, he was assigned some extra work after practice the next week.  He still says that he is the only former Calvin player to get kicked out of a game and live to tell about it.

The 1969 team had many outstanding characteristics, but probably the most valuable one was a potent rushing attack.  Running out of the Power I about 95% of the time, the Aggies rolled up big yardage all year behind a dominating offensive line.   Junior Randy Billingsley was the leading rusher with over 1,000 yards and scoring 106 points, but he was not alone. For example, in a 35-0 win over a decent Comer team in the final regular season game, Billingsley, fullback Russ Stanton, and halfback Ted Ham each rushed for over 100 yards. Quarterback Ken McLain added some 60 yards contributing to just under 400 yards on the ground.

After that blowout over Comer, came the first round of the playoffs with the Aggies hosting Russellville, a team that had won the two previous state titles. They were expected to prevail again although Bibb County was ranked #1.

As our players and coaches were leaving to old gym headed to the lunchroom for the pregame meal, a Russellville bus passed by on Norton with a sign on the side that said “What’s An Aggie”?  Some of our players saw the sign and vowed to answer that question on the field.

After an early goal line stand inside the 5 yard line, the powerful Aggie offense marched 90 plus yards for the game’s first score.  From that point, SHS dominated, winning 42-12.

That set the stage of the Championship Game.  Robertsdale upset Bibb County to advance, and the Aggies got the home field advantage again. SHS led 18-6 at the half; tacked on two more TD’s in the third quarter; and another six pointer in the final stanza to win 36-14. Billingsley rushed for 141 yards and 3 touchdowns on 16 carries, and Stanton carried 13 times for 101 yards. Ham scored the game’s first TD on a 7 yarder to cap a 70 yard drive in the first quarter.

McLain sneaked in for two scores and set up another TD with a 26 yard pass to Gary Epperson.  SHS had 364 yards on the ground and 41 through the air.  The defense dominated in both playoff games.

Rewards were plentiful after the season.  Sprayberry, Whetstone, McLain, and Billingsley were all first team All County; while Wesson, Lister, Allison, and Ham were on the second team.  McLain, Sprayberry, and Billingsley all made first team All State; Lister was second team; and Wesson and Allison were honorable mention.  Sprayberry made Super All State and honorable mention All American.  He and McLain played int the State All Star Game.  Coach Calvin was proclaimed “Coach of the Year’ by several media outlets.  Also, seven members of the squad played later at the college level.