SYLACAUGA, Ala. – The Sylacauga Police Department has identified a major problem within the city limits: counterfeit money.

“Counterfeit money is always a problem,” said Sylacauga Police Department chief investigator Lt. Michael Moore. “An increase started six months to a year ago, but I could not even begin to tell you how many we’ve seen.”

The bills floating around in the last month are easier to get than most people believe according to Moore. He said all criminals need is a computer or phone and internet service to get fake money delivered directly to your doorstep.

SPD has tried to stop the influx. Moore said he has been in contact with the secret service which has intercepted “tons of them.” He also noted it is not a crime to possess the bills, but it is a crime as soon as someone passes the bill along as currency. Criminals are also able to take smaller bills such as ones and fives and transform them into large bills. He attributes videos on the internet to help make the process easy for perpetrators.

SylacaugaNews.com was able to get an exclusive and up-close look at the phony cash obtained by the SPD. The bills provided for photographs have foreign writing and symbols as well as dotted lines in the corners. He said people will often mark over the symbols, cut the corners off or distress and crumble the money to the point these symbols and lines cannot be seen.

“People need to be on the lookout more than ever,” Moore said. “Identifying these blemishes can make it easy for businesses to spot what is fake and what is real.”

Counterfeit cash is nothing new to Trailwares owner Nancy Willis. She spent much of her adult life as a department manager at the local Walmart and said she ran into the issue all the time. “It happens more than the average person thinks it does,” she said. “You see it often, but it happens even more around the holidays.”

It is not always easy to determine whether or not a bill is real or fake. According to Willis and Moore, criminals seem to be more cunning than what many think. Willis laid out a process these criminals will go through to make sure their money makes it into a store’s cash register undetected. She said the trick is not always in the bill itself. Often criminals will try to determine who is new at a store, or find a fresh face they have not seen in the past. That person becomes their target.

“Some people have never had to deal with counterfeit money,” she explained. “So when they receive it they really have no idea what they received.”

Changing what bills they counterfeit is also a way many bills go undetected until they make it to a bank. Willis said it is a common misconception that only large bills will be fraudulent. In her long career in retail, she said many small bills, which are fake, will go undetected simply because they are not checked with a marker or held up to the light to check for water marks like the larger $50 or $100 bills. She also explained many of these criminals have become so good at making the water marks that it almost makes it impossible to spot them as fakes. 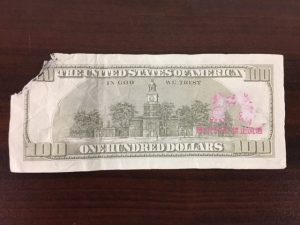 After learning of the insurgence of fraudulent cash in the city, Willis said her store will now be taking an extra look at every dollar that comes her way, although she does not believe she has intercepted any since she her doors opened just a few weeks ago. “We all have to be more cautious,” she said. “Now that we know these bills are floating around we will be on the look out.”

Moore said keeping an intense watch on this issue should be important for all business owners. Not only could they be intercepting fake money, but these criminals could walk out of the store with free merchandise.

“When it happens to you, you’re not only out of the item you sold, but you’re also out of the money you thought you made. It’s just a more advanced way of shop-lifting,” Willis explained.

Moore said the SPD does have its eye on a few possible suspects and is tracking every lead. He said businesses and police should work together to make sure this criminal is stopped.

You're The One That I Want
John Travolta & Olivia Newton-John