The House That Built Me
Miranda Lambert 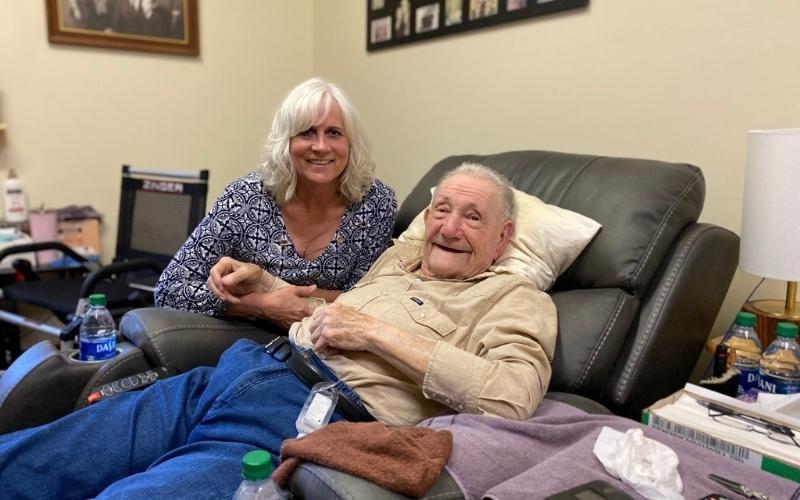 [SPONSORED CONTENT: This story was written by Robin DeMonia of Direct Communications for Sylacauga Health and Rehab]

Sylacauga, Ala. – With Father’s Day only weeks away, Valerie Scoggins sat beside Ray Stephenson at his assisted living apartment at Sylacauga Health and Rehab Services, and helped him share stories accumulated over 93 years.

Those stories brought Stephenson from his native Texas to Alabama, then from Birmingham to Childersburg, where he put down deep roots, brought up five children and continued to work until age 86.

For Stephenson, some of the memories along the way have dimmed. But his eyes still shine brightly as Scoggins recounts family lore from his time as an Air Force aviation mechanic, a door-to-door salesman, a farmer and an owner/handyman for dozens of rental homes in the Sylacauga/Childersburg area.

“You were a jack of all trades,” Scoggins said.

“And a master of none,” Stephenson responds with a wide grin.

Scoggins had the day off and was visiting simply as the daughter of a “super good man.” But she is also the Clinical Services Director for Noland Health Services, which owns Sylacauga Health and Rehab as well as the nearby Spring Terrace assisted living facility.

She considers it a blessing to work in a facility that served her mother before her death and that continues to serve her father. “It actually has been kind of comforting for me because I know how they’re being cared for, and I can check on them easily,” Scoggins said.

Scoggins’ experience is not altogether unique. At healthcare facilities in small towns, family connections are not uncommon – and truth be told, the sense of family connection often goes far beyond blood.

The greater Sylacauga community recently voted Spring Terrace “Best of Coosa Valley” among assisted living facilities, and Sylacauga Health and Rehab received the same recognition in the skilled nursing category. But for staff, residents and their families, what sets both facilities apart are the hometown ties that connect them all.

“My husband’s elementary teacher is here. The ladies who took care of me when I was 4, we get to take care of now. I learned my ABCs from a lady, and I got to hold her hand when she passed,” said Shannon Faircloth, Executive Director of Sylacauga Health and Rehab. “It just shows how life circles around.”

Many employees are like Faircloth. They grew up in the area, know the residents and their families, and have invested years of their lives in jobs that keep them firmly planted in their community. “I walk down the hall and people say, ‘You look just like your mom,’” Faircloth said. “It’s literally home away from home.”

Holidays do not go unnoticed here, and for days that aren’t holidays, well, everyone likes to make them special, too.

For Father’s Day this weekend, there’ll be “Floats for Fathers,” a social featuring root beer floats. In weeks ahead, there’ll be a petting zoo and a fishing adventure at the facilities’ pond. This year on Mother’s Day weekend, there were “Muffins for Moms,” as well as an ice cream social organized by a family member of a resident. 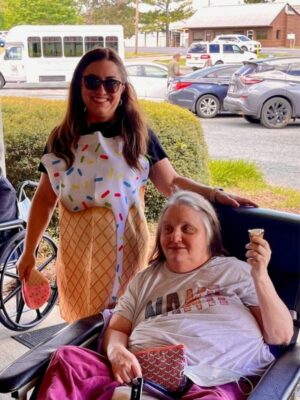 April Duncan’s mother, Barbara Bailey, has multiple sclerosis and has lived at Sylacauga Health and Rehab since 2009. The ice cream social, scheduled to last one hour, stretched out for five hours, and Duncan didn’t mind one bit.

“It’s as much for staff as for residents,” Duncan said. “They’re so appreciative. Their jobs are not easy.”

Duncan, who now lives in Georgia, has schoolmates who work at the facility, and she has grown close to the whole staff. Her family’s Christmases are celebrated on site with them. Her husband, Edwin, asked for her hand at the nursing home in front of a roomful of residents, family, and staff who help orchestrate the proposal. But what matters most to Duncan are the everyday social activities like bingo and crafts that keep her mom smiling despite her physical limitations.

“She has a good life. We didn’t realize what she was missing until she experienced life here,” Duncan said. “My mom tells me, ‘I don’t know what they’d do without me around here.’ She feels important to them. She feels needed. She feels loved. She’s not afraid. She knows if she gets sick, they’ll take care of her.”

If anything, those bonds grew stronger during the COVID crisis when families could not visit.

“They were the ones that would go by and pat my mom on the foot and let her have that human touch when no one else could,” Duncan said. “The staff looked for every possible way to safely engage the residents – physically, always, but also emotionally.”

Scoggins’ father initially came to Spring Terrace in 2015 because of her mother, whose mind and physical health had begun to decline. Stephenson recognized his wife needed more assistance than he could provide, and he was the first to admit it. He has continued to be just as clear-eyed about his own increasing needs over the years.

“Throughout his life, he always knew where he needed to be. He has been such a trooper through it all,” Scoggins said. “The biggest comfort to both of us is knowing someone is there to help him when he needs it.”

Faircloth said some members of the staff spend decades in their jobs, and in a small community, they routinely encounter relatives of their residents at the grocery store and other places. Their bonds are often forever, forged not only in happy times, but in tough times – perhaps the difficult initial decision to seek care or the sorrowful moments at the end of a life.

“We become families to the families,” Faircloth said.