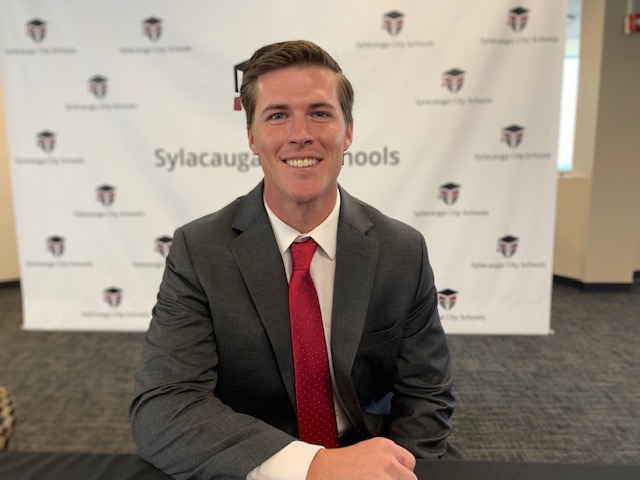 Fullington has been an assistant coach in many sports for Vestavia Hills including basketball while also  serving as the head golf coach since 2016.

The hunt for the next head coach began in May when William Copeland left the Aggies to go to Florence High School. Superintendent Dr. Jon Segars said SHS had about 35 candidates on its radar for replacing its state championship winning head coach. Fullington was vetted by Athletics Director Matt Griffith and assistant coaches, and eventually came out on top.

Administration at SHS is excited.

“Kent is a young guy that will bring a lot of energy to the program,” said Griffith.

“Kent has a strong record as an assistant coach and he knows his basketball. We like that,” said Segars. “He comes as a winner. We are excited.”

Sylacauga is one of the top basketball jobs in the state and Fullington told media on Thursday he is ready to get started.

“That conversation [with Freeman] was unbelievable. They were all high on the kid and did not want to lose him.”

Walking into this job, however, comes with high expectations, especially considering Fullington will come into a program that has seen three consecutive Elite 8 appearances, two Final 4 appearances in the last three years and a state title just two seasons ago.

“He’s going to walk in and have an immediate impact. He just really stood out among a small group [of candidates] with his youthful energy, experience and the wins,” Segars said. “We weren’t going to hire somebody that didn’t know how to win. Winning is the expectation.”

Sylacauga has some fire power to help Fullington in his first season as head coach, but much of the team will be new faces. Sylacauga graduated 10 seniors in 2019, but Shannon Grant, Sylacauga’s dominant center, will anchor the paint for the Aggies in his final season in the cardinal and white.

Fullington is a graduate of Oak Mountain High School and earned his bachelor’s from the University of Montevallo in 2014 in kinesiology.

Laughter In The Rain
Neil Sedaka