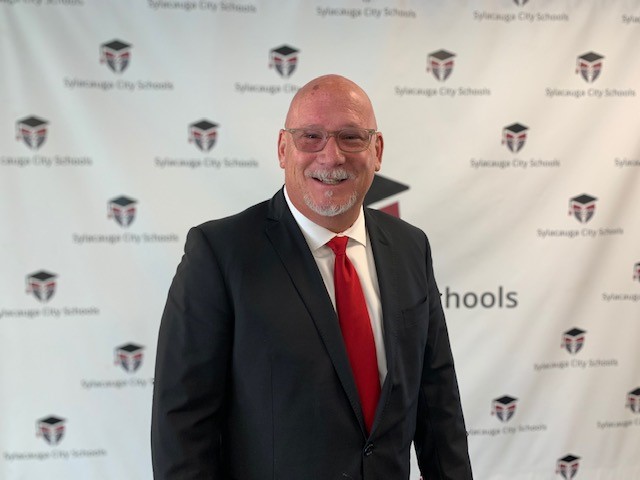 SYLACAUGA, Ala. – ‘Every student. Every day. No matter what it takes.’ That is the motto of new Sylacauga High School principal Matthew Hodge.

The Sylacauga Board of Education unanimously selected Matthew Hodge as the new principal of SHS Friday morning.

Before becoming an administrator, Hodge spent 22 years in the classroom in Jefferson County. Overall, Hodge brings a 28-year career in education to the halls of SHS. Hodge has served as principal at W.S. Neal High School in East Brewton for the last three years.

In his career, Hodge has been a jack of all trades. Hodge has driven a bus route and coached wrestling, football, baseball, and cross country while in Jefferson County. He became an administrator at Pinson Valley High School in 2015, and the following year accepted an administrative position at Pell City High School where he served as assistant principal and athletic director. In 2018, Hodge was named principal at W.S. Neal High in East Brewton.

He and his wife Christine have been married 29 years. She is a case manager of the Neonatal Intensive Care Unit at UAB hospital and also serves as transport coordinator for critical care. They have raised three children and have added a one-year old English Springer Spaniel to their family.

Hodge focuses on students taking what they learn and do at school, and turning that into real world opportunities. “I need to give students an overall ability to have opportunity at school, but also take those opportunities and move out into the real world,” he said. “Our goal is that they can move forward with what we built with them, so they can establish themselves as adults and good citizens.”

“With his commitment and drive toward excellence, Mr. Hodge will build upon the Sylacauga High School foundation to ensure that all students receive a quality education to prepare them for college, career, and community,” said Superintendent Dr. Michele Eller.

Hodge will begin his duties July 1.