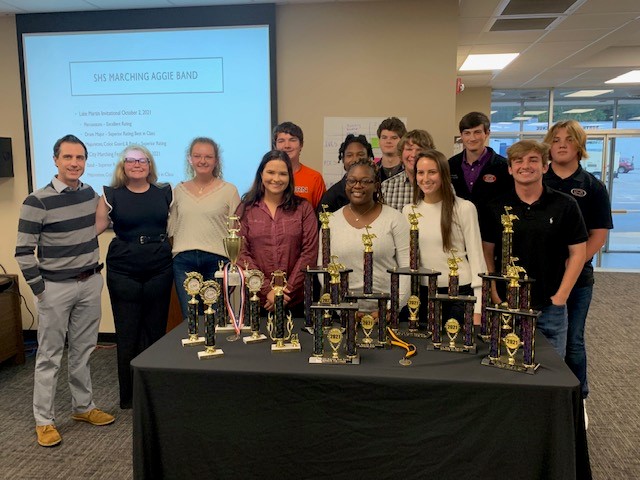 SYLACAUGA, Ala. – At Wednesday night’s Sylacauga school board meeting, the SHS band and volleyball team were recognized for their recent accomplishments.

Superintendent Dr. Michele Eller introduced band director Samuel Childs to review the band’s magnificent fall season. This year, the band featured 42 students that were marching for the first time. Although inexperienced going into the year, the band accomplished many of its goal. Most recently, the band competed at Pell City Marching Festival where it where it scored 1’s in the following categories; Drum Major, Percussion, Majorettes, and Color Guard. It won best in class for Majorettes, Color Guard and Percussion.

“It has been an exciting year and a trying year as they learned,” said Childs. “We learned from it all, and I felt like it has been a really great year.”

With football still in the postseason, band members will transition to concert season before it has its winter concert in December.

The Aggie volleyball team was also recognized for the season it put together this fall. Going into the year, first-year head coach Rebecca Paterson said she had three goals; win the county, win the area, and make it to state. The team accomplished all three.

Sylacauga City Schools to remain in-person as of Wednesday