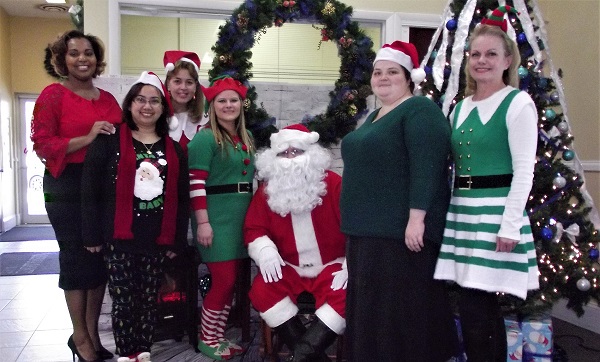 CHILDERSBURG, Ala – With just eight days left until he makes his voyage around the world trip ride in his sleigh, Santa Claus stopped to visit children at the Childersburg branch of Renasant Bank.

The ladies of the branch decked the halls with Christmas red and green and had a special area for Santa ready to go upon his arrival. They also had some of Santa’s favorite snacks and drinks. Dozens of children lined up to see the man in the red suit — some excited, some scared. But fears quickly faded as they sat on his lap and spilled their Christmas list quietly into Santa’s ear.

Along with the list of wants and wishes, the children also gave their version of the annual behavior report in hopes of being on the nice list. Some even asked Santa what list they were on before stating their case and taking a picture with him.

The reason for this visit was, of course, for the kids. But there was an even a more important purpose.

During this time of the year, all proceeds gathered during Santa’s visit were donated to Habitat for Humanity. The Habitat Birmingham branch of the global organization serves Jefferson, Shelby, St. Clair, and Walker Counties in Central Alabama. It is dedicated to making quality, affordable housing for low-income families. The Habitat Birmingham branch is ranked in the top 10 of more than 1,400 branches in the United States.

Of course, with Santa in town, he saw the results of hard work by so many Alabamians first-hand during his travels.

SylacaugaNews.com had a few moments to talk with Santa before he returned to the North Pole. He touched on Christmas being so close and the visual impact of Habitat for Humanity during this time of year.

“I love seeing all the kids reactions and it never gets old to hear the giggles and see the smiling faces,” he said. “I always remember to thank each of them for cookies and milk waiting on me when I visit and drop off each special present. I love working with Habitat for Humanity, and seeing so many caring people giving during this time of the year is a wonderful thing.”

Renasant Bank prides itself on being involved in the community. Among other various events it holds, this is the first Christmas event the branch has ever held. Branch manager Janice Grohs said there “will be many more to come.”