Everyone She Knows
Kenny Chesney 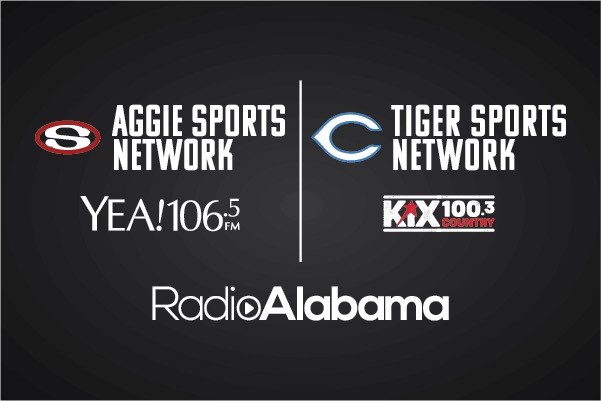 SYLACAUGA, Ala. – RadioAlabama’s seven-signal network, spanning across east central Alabama, is set to launch new extensions of its sports broadcasts starting this fall.

But that’s not all.

“We are very fortunate to be working with such great partners in our schools and businesses in our community,” said Michael Brannon, Executive Vice President of RadioAlabama. “The fact that we had so much success with SHS last year shows in our partnership with CHS this year. This is all geared toward showing recognition to hard-working student athletes in our area that not only put in hard work in the classroom, but on the field and court as well.”

ASN and TSN will feature broadcasts all football games and a minimum of one basketball and baseball game each week, both home and away.

In addition to the new game broadcasts, RadioAlabama has expanded its Thursday night lineup on KiX 100.3. The Coach Griffith Show will air from 6:00-6:30 p.m. followed by The Coach Beverly Show from 6:30-7 p.m. concluding with the East Central Alabama High School Football Coaches Show from 7:00-7:30 p.m. The Thursday night coaches shows will be broadcast live from Huddle House on Hwy. 280 in Sylacauga.

“We truly have the best sports broadcast team around,” said Brannon. “The quality of the broadcast, technology in place, the sound, elements, imaging, and overall knowledge of the game is far superior to any other local broadcast in the area – and for that we’re incredibly blessed and proud.”

According to Brannon, sponsors have eagerly jumped on board.

“It’s been incredible. Our sponsors understand what we are doing. They understand this is all about being local and thinking really big,” said Brannon. “This isn’t about conventional advertising. It’s different. People are tuned in to listen to these games. It’s a captive audience…and they’re listening. The great thing about what we are doing is that we’re not just locally over-the-air on FM and AM. You can hear us wherever you are. We’re streaming our audio directly on our websites and Apple and Android apps, but can also be heard on iHeart, TuneIn, and on Amazon Alexa-enabled devices. We are where you are.”

In 2016, RadioAlabama broadcast a Game of the Week format including live broadcasts of area schools. You might be thinking: “What about the other area schools?” During the 2018 football season, reporters from area schools will call-in updates to the ASN and TSN while broadcasts are in progress.

RadioAlabama is the only media entity headquartered in east central Alabama offering HD signals. In June 2018, 98.3 Fox FM increased power becoming a regional station and added digital signals. RadioAlabama’s signals collectively serve the U.S. Highway 280 corridor between Birmingham and Auburn and from the Talladega area south to and through Montgomery. The award-winning multimedia company plans to launch its newest station in Auburn late 2018.

Brannon said plans are in place to expand sports coverage throughout other parts of the RadioAlabama coverage areas in the next few years.

Corporate and individual sponsorship packages are still available for the 2018-2019 season. For more information, e-mail tellmemore@radioalabama.net.