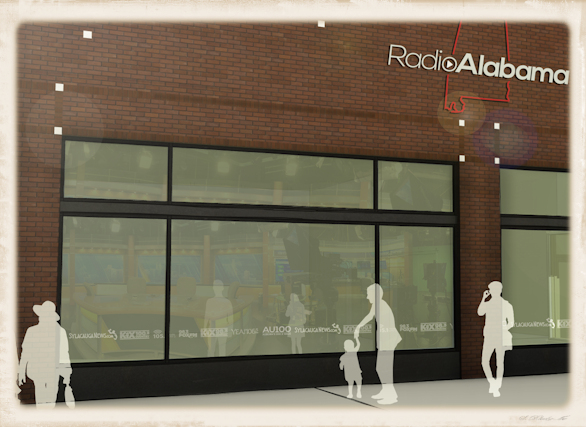 SYLACAUGA, Ala. – Sylacauga-based Marble City Media LLC, along with six radio station brands serving east central Alabama under its RadioAlabama umbrella and the SylacaugaNews.com online news channel, will begin the move to a newly-acquired downtown building on the southern edge of the city’s historic commercial district this summer. The property purchase closed today.

The new multimedia center at the corner of N. Norton Ave. and W. 1st St. will be home to all of the company’s text, audio, and video production along with its engineering, administrative, marketing, and sales teams. The 19,282 sq. ft. building is one of the area’s largest and incorporates a structure originally built in 1920 which, along with a classic barrel vault ceiling and sealed skylight, shares a rear wall with the former Modern Cleaners, constructed in 1946 and designated by the National Park Service as a contributing resource in the historic district.

Almost 3,000 sq. ft. will be dedicated to a multi-set video production studio and new radio studios visible for public observation from outside. Parts of the massive television news, sports, and weather sets were created for Hearst Broadcasting’s WTAE-TV, Pittsburgh, and had been in use at WVTM-TV, Birmingham, until decommissioned for replacement this week.

“This will also be a return to downtown for our first radio station, launched as WMLS-AM just a block away at 11½ W. 2nd St. on May 16, 1948,” said Marble City Media’s Lee Perryman, President & CEO. “The major expansion — to more than 10 times the size of our current facility — is part of our continuing investment in Sylacauga and commitment to serving the public, area businesses, and industry as a local economic catalyst.”

“We are passionate about excellence in everything we do and in helping inform, educate, and entertain the communities we are licensed to serve,” added Michael Brannon, Executive Vice President, Managing Editor, and Director, Business & Digital Strategy. “Having outgrown our current facility, this new base of operations in the heart of the city will give us almost unimaginable flexibility to coordinate even more content production for multiple audio, video, and digital platforms – and, most importantly, to continue making a difference.”

Marble City Media LLC and its predecessors have operated from 1 Motes Rd. in the northern part of the city since the tower and transmitter site were constructed there in 1947.

“The new location is oddly historic,” Perryman noted. “In 1909, the site hosted Marble City Mills, which was destroyed by a tornado along with other commercial district properties in 1917. In 1981, an explosion fueled by a natural gas leak leveled a laundry, the Sylacauga Insurance Agency, and most of the Garris Furniture & Specialties business there.”

The largest portion of the current building, constructed in 1986 as Heilig-Meyers Furniture Co., was among hundreds of stores closed nationwide due to bankruptcy in 2000. The Fun Store opened in 2005, and owners Wayne and Sue Keahey plan to retire in July.

Ryan Coleman of Difference Architecture LLC, also based in Sylacauga, is the Project Architect collaborating with Perryman and Brannon on the makeover which will include significant exterior and interior renovation. Most recently, Coleman served as Project Architect for the Hamilton Place wedding venue and The Inn at Pursell Farms.

As the largest, fastest-growing, and most award-winning privately-owned radio group in the east-central part of the state, RadioAlabama operates transmission facilities in four counties for its six FM and two AM stations, including the area’s only HD Radio channels.

The group’s terrestrial signals cover northwest to southeast from the outskirts of Birmingham to Auburn and north to south from I-20 at Pell City to and through Montgomery, in addition to being globally available online and via mobile apps and smart speaker skills along with iHeart Radio and TuneIn. The company’s reach includes several complementary social media channels, nine websites, and two high school sports networks.

98.3 Fox FM ups power by another 50%, remains area’s strongest and only HD station

The Daily Home to cease publication on Tuesdays