Lovin' on You
Luke Combs 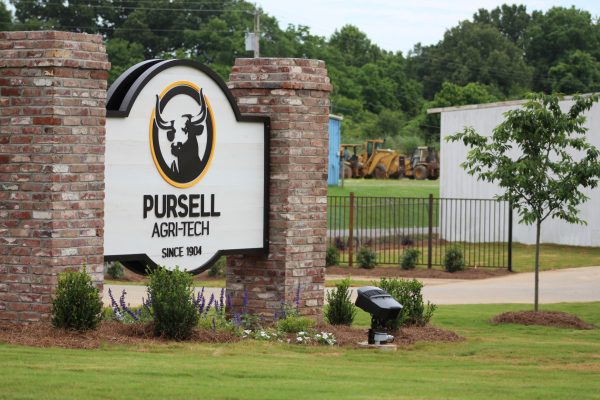 Pursell Agri-Tech, an innovative new fertilizer coating facility, sits marvelously along Millerville Highway as you begin exit Sylacauga and move towards Clay County. The plant will produce next-generation controlled-release fertilizers that will enhance nutrient-use efficiency and increase agricultural output and productivity while reducing the impact traditional fertilizers can have on the environment.

The vision of Taylor Pursell, chairman of the company, is to help feed an the ever-growing population of the world. In a speech at the grand opening, Pursell said as the world grows the fertilizer industry must evolve and become more efficient to feed the 7.5 billion people that inherit the planet today.

A statement from the company explained the dilemma facing the world, “Approximately 7.5 billion people inhabit the world today, with the United Nations predicting the global population to expand to 9.6 billion by 2050. Food supplies must increase exponentially to meet the demands of this ever-growing population. While yield increases are possible, they will not happen without new, more efficient and more sustainable fertilizer technologies.”

“The vision is that we have a growing population, we have a fixed amount of land to grow food to feed the people, and we have a higher expectation for the standard of living around the world,” explained President and CEO of Pursell Agri-Tech Nick Adamchek. “We have to change the game and move the needle as far as nutrition is concerned. That’s what this is all about.”

So how does this company plan to change the landscape of the fertilizer industry to consequently feed more people in a highly malnourished world?

More than 200 million tons of nitrogen fertilizers are applied each year, but the International Fertilizer Development Center (IFDC) estimates that only one of every three pounds of this applied nitrogen is actually taken up and used by the plants for which the nutrient is intended. The remainder ends up in the ground water and the atmosphere, ultimately wasting the product.

The local plant explains a better solution to the industry and betterment of the world. After years of research and testing, Pursell Agri-Tech, which traces its roots to 1904 when DeWitt Parker founded the Sylacauga Fertilizer Company to serve local farmers, has developed a new, low-cost system to coat agricultural fertilizers to more efficiently release nutrients when they are needed in a plant’s growth cycle.

The system features a combination of unique coating materials applied through proprietary processing techniques in a low-cost modular facility design that allows plants to be placed closer to the markets they serve, removing additional cost from production and distribution. Pursell Agri-Tech is producing the following branded controlled-release fertilizers products: Transcend for the broadacre agricultural market; Transcend SA for the high-value specialty ag market; and PurKote for the golf, turf, landscape and ornamental segment.

“For nearly a century, the state of Alabama and Sylacauga, in particular, have had a profound impact on modern agriculture’s ability to produce nutritious food for our expanding global population,” says says Nick Adamchak, Pursell president and CEO.

“We’re proud of this history, but we’re even more excited about what lies ahead,” Adamchak added. “At Pursell, we’re delighted to be part of a larger team – and a larger effort – that is focused and committed to developing and delivering new sustainable, yield-enhancing technologies that can have a significant, lasting impact on global food security.”

The impact will be even greater on the city of Sylacauga. Over 22 new jobs will be created in the plant over the next three years and the company made a capital investment of $8,450,000 to the area.

Sylacauga’s Allen Sanders will serve as Vice President of Operations of the plant. Sanders has 25 years of fertilizer product development experience, and has been instrumental in developing and refining multiple coating process technologies at Pursell and Agrium.