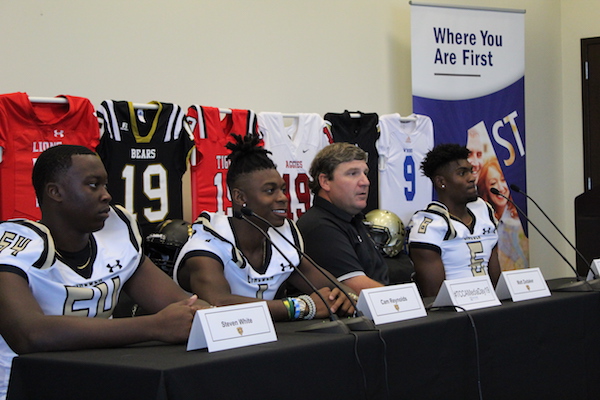 “We get to the ball,” Zedaker said. “Coach Mansfield, our defensive coordinator, does a tremendous job with effort, with pursuit, with just the nastiness we want to bring. We want to be known as one of the hardest hitting teams in the county, and coach Mansfield preaches that all the time.”

Lincoln’s defense allowed fewer than 20 points per game for the first time since 2014. In allowing 19 points per game, Lincoln had its best defense statistically since 2007.

For the first time since 2014, Lincoln had a winning season last year, finishing with a 7-4 record and a region championship. The Golden Bears lost in the first round of the playoffs to Alabama Christian.

Zedaker is entering his third season as head coach of the program, seeing major improvement over the last two years. Lincoln was 1-9 in his first season.

“The foundation was laid really well for us last year. We had an unbelievable senior class that had a lot of leadership that showed the way. Our motto last year was ‘B.A.L.L., Building a Lincoln Legacy,’ and that’s kind of what we started. That’s what we want to do here at Lincoln.”

“With this group here, now it’s talking about let’s take the next step. Let’s not be that program that’s good one year, and we are not good for a couple of years. We want to become a consistent, winning program that’s successful year in and year out.”

With that improvement, Zedaker said the Lincoln community is excited about its football team.

“The biggest thing I love about Lincoln is people from Lincoln love Lincoln.”

Additionally, Zedaker doesn’t expect to sneak up on any of the teams on his schedule after a successful season a year ago.

“We kind of snuck up on some folks,” Zedaker said. “Going from the hunter to the hunted now. That’s kind of been our mantra this year. To make sure that we are outworking everybody else because we know we are going to get everyone’s best game.”

After ending a year with a loss in the first round of the playoffs, Lincoln is looking to take the next step this season.

Zedaker said his expectation is to have a better record than the year before and to go further in the playoffs.

Lincoln will open their season with a road game against Southside Gadsden on August 23.

Whenever I Call You Friend
Kenny Loggins with Stevie Nicks