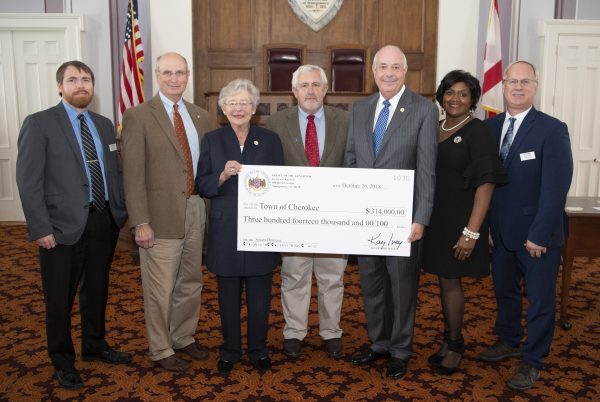 Governor Kay Ivey joined ADECA Director Kenneth Boswell in awarding 55 Community Development Block Grants (CDBGs) Friday October 26, 2018 in Montgomery, Ala. The 55 grants total approximately $17.7 million and will go to 54 cities in 11 counties, helping to complete vital infrastructure projects that will improve the quality of life for residents. The Alabama Department of Economic and Community Affairs manages the CDBG program in Alabama from funds made available by the U.S. Department of Housing and Urban Development. (Governor's Office/Hal Yeager)

“The beginning of a better Alabama starts today for many residents who are without clean water to drink or safe roads to drive or suitable housing in which to live,” Governor Ivey said. “I am pleased to award these grants to support vital community improvement projects, and I commend the dedicated local officials who sought these grants with the intent to make their communities better places to live.”

Community Development Block Grants are awarded annually through a competitive process in four main categories including small city, large city, counties and community enhancements. Other categories in this round include Black Belt and planning grants. Award determinations are based on the number of low and moderate-income families affected, urgency of the need and project cost efficiency.

The Alabama Department of Economic and Community Affairs is administering the grants from funds made available by the U.S. Department of Housing and Urban Development.

“As a former mayor whose city has been a recipient of CDBG awards, I can attest to how important this program is to our towns, cities and counties and the difference these grants can make in a community,” ADECA Director Kenneth Boswell said. “ADECA is pleased to join Governor Ivey in the partnerships that it takes to make these grants come to fruition.”

Those awarded grants, grant amounts and projects are:

(Municipalities with populations of 3,000 or less)

Cherokee – $314,000 for street and drainage improvements.

Woodville – $350,000 for street and drainage improvements.

(Municipalities with populations of 3,001 or more)

Tuskegee – $450,000 for water and street improvements, and demolition and revitalization.

Baldwin County – $350,000 for water improvements near the Lillian community.

Washington County – $350,000 for water improvement in the Fruitdale area.

(municipalities of all sizes and 65 Alabama counties for projects addressing quality of life issues.)

Barbour County – $250,000 for a new fire station in the Texasville community.

Blountsville – $250,000 for sewer and street improvements.

Lauderdale County – $202,569 for a new senior center in the Greenhill community.

(municipalities and counties within a 12-county Black Belt region.)

(awarded to guide municipalities in orderly growth, revitalization or development.)